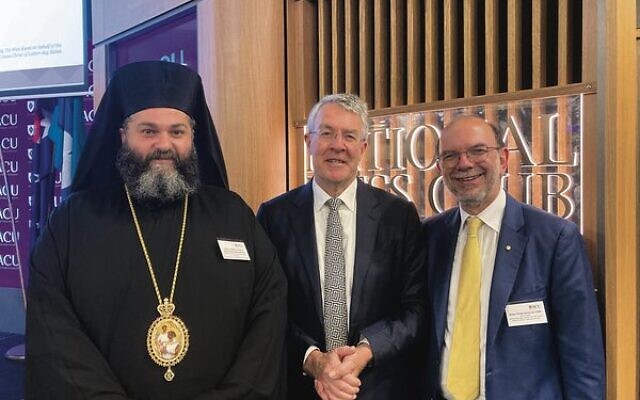 On June 2015, I attended the inaugural interfaith parliamentary breakfast. A fortnight ago, after a COVID hiatus of two years, I attended, together with several Jewish representatives from across the country, the Federal Parliamentary Interfaith Breakfast held at the Press Club in Canberra under the auspices of the Australian Catholic University.

It was a colourful event – a mix of the formal suits of our parliamentary representatives, and the robes and icons of our interfaith dignitaries. It was, however, not the clothing, but the content that gave this breakfast its colour and its substance.

It is rare to go to a function with all the speeches being of high quality. This breakfast provided a lot more than cereal and fruit; it served up heaps of rare and stimulating dishes. It was a cerebral and spiritual feast.

It began with the outstanding introduction by Ashley Medalia, the Jewish master of ceremonies; it continued with the vibrant and witty words and invocation of country, by Nugganawal Elder Auntie Violet Sheridan and her impassioned plea to support the Uluru Statement, quoting the well-known verses: “Don’t walk behind me, I may not lead.

“Don’t walk in front of me, I may not follow. Just walk beside me and be my friend.”

The prayer by Sr Farquer before the meal was eloquent entree: “Conscious of our identity as members of the same human family, we connect together to that Creative Power within and beyond our common humanity. Let us relish the opportunities presented to us this morning …”

It was, however, the three guest speakers that made the most powerful impact.

The first was leader of the opposition, Peter Dutton MP.

Dutton gave a spirited and challenging analysis of Andrew Thorburn, who resigned as the Essendon AFL club’s chief executive over his links to a church that condemns homosexuality and abortion. Even though I did not agree with the conclusion of his argument, the logic and clarity of it was stimulating.

He was followed by Attorney-General and Cabinet Secretary, Mark Dreyfus KC MP. While Dreyfus did not directly respond to Dutton, his thoughtful and nuanced presentation did address the issue of religion and politics as a “difficult, delicate and many-sided discussion”.

He referred to the Australian Law Reform Commission (ALRC) he had established to review religious exemptions for educational institutions in federal anti-discrimination law.

The ALRC had been charged with advising on the best way to protect staff in religious schools from discrimination at work, while maintaining the right of religious schools to preference people of their faith in the selection of staff.

Dreyfus spoke about how his own Jewish religious beliefs informed his passion for an Australia that is genuinely inclusive, for a country that respects religious and cultural diversity.

He also echoed the words of his press release in November when he said: “To lead the ALRC’s inquiry I have appointed the Hon Justice Stephen Rothman AM of the New South Wales Supreme Court as a part-time commissioner. Justice Rothman is an eminent lawyer with a deep interest in and a longstanding involvement with the Jewish education sector. I consider him to be ideally placed to lead this inquiry.”

The final speaker was the respected writer, journalist, radio and TV celebrity, currently Q&A presenter, Professor Stan Grant. I have long admired Grant and having recently read his book, Talking to my Country, I was anticipating a scintillating speech. I wasn’t disappointed. He was the icing on the cake, if not the cake itself.

Speaking with a quiet and contained energy, he spoke about his religious upbringing in a small whitewashed church in Griffith. Here in this humble space he learned about the tremendous gravity-defying power of love in a world where we can so easily feel unloved. Referring to the secular French Jewish philosopher and mystic Simone Weil, who felt a spirit of God entered her when she felt most forsaken, Grant suggested that it’s when we feel abandoned by God that He lets love lead us back to Him.

Grant’s words resonated. They reminded me of the insight of Rabbi Jonathan Sacks that the deepest crises of our lives can turn out to be the moments when we encounter the deepest truths and discover the greatest strengths. Jacob finds God in the darkest and most lonely moments of his life. He wakes up from his dream and fears of death (Genesis 28:12-17) with an epiphany: Surely the Lord is in this place – and I did not know it!

Some may lament the increasing secularity of Australian society. This breakfast bolstered my faith in the power of faith to inform and inspire our country. Perhaps even a model to countries across the world – including Israel – that religion and politics can be a tasty cocktail, and not a toxic meal.