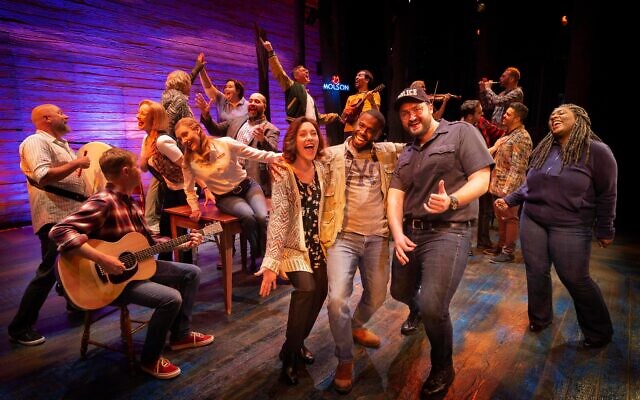 The cast and band members in full voice in Come From Away. Photo: Jeff Busby

The stage has only basic props and is crowded with actors playing multiple roles – it could have been a recipe for disaster, but instead it’s the secret for success in the musical Come From Away, which has returned to Melbourne’s Comedy Theatre after COVID-19 interrupted its premiere season from July 2019 and an encore season last year.

The action is set in the aftermath of the terror attacks of 9/11 when American authorities diverted all commercial flights away from US soil, forcing 38 aircraft with more than 6,500 passengers to land in the small town of Gander in Newfoundland, Canada.

How the townspeople rallied to help their unexpected guests, making them comfortable in makeshift facilities and welcoming them into their homes and hearts is at the crux of the musical.

Come From Away progresses at a rapid-fire pace, with each actor playing multiple roles, cleverly mixing humour, lively repartee and pathos with wonderful folk music from the eight-member band performing at the rear of the stage using Celtic instruments played in Newfoundland as well as instruments from around the world.

The characters are based on real people and include a female airline captain who shows compassionate leadership (played by Zoe Gertz who is back for her third season), gay couple Kevin T and Kevin J (Douglas Hansell back for this third season and Joseph Naim back for a second season) who are needlessly anxious about how the locals will treat them, a mother of a fireman missing in Manhattan and desperate for news (played by newcomer Sarah Nairne), local mayor Claude (David Silvestri) who is working around the clock, and the Englishman and Texas woman who fall in love (Phillip Lowe back for a second season and newcomer Natalie O’Donnell). 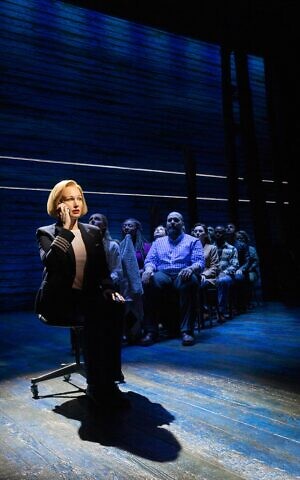 Airline captain Beverley (played by Zoe Gertz) and passengers in Come From Away. Photo: Jeff Busby

Among the passengers is a rabbi (played by newcomer Joe Kosky) who organises a Shabbat dinner for Jews and Hindus and sings a Hebrew prayer.

Tensions rise when a Muslim passenger sparks security concerns among other passengers as they learn more details about the Twin Towers attacks.

Throughout the fast-paced musical we learn about the kindness and generosity of the people of Gander.

Many of the songs are toe-tapping numbers that add enormously to the enjoyment of Come From Away.

Despite the subject matter of the September 11 terror attacks, Come From Away is a wonderful feel-good musical that, despite its minimal staging and low-key choreography, rides a wave of emotion.

With each actor playing a variety of roles, the show does not rely on star power to succeed.

The script and music by Canadian couple Irene Sankoff and David Hein is uplifting and joyous, with the 100-minute production – staged without an interval – leaving the audience on a high.

During the previous two Melbourne seasons it was reported that every performance received a standing ovation, and judging by the September 1 opening night reaction the trend is set to continue.

Come From Away is at the Comedy Theatre, Melbourne until October before returning to Sydney’s Theatre Royal in November. Bookings: comefromaway.com.au