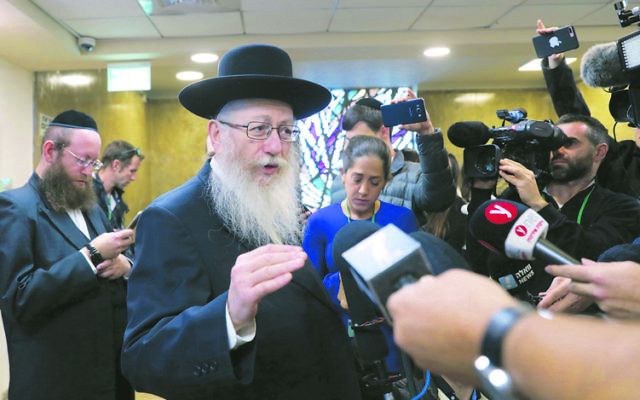 Litzman is said to have protected them to such a degree that a psychiatrist was told how to conclude a Leifer assessment based on his requests, and convicts are said to have received furloughs following his intervention. Litzman denies all wrongdoing, and says that he helps everyone who turns to him equally and within the confines of the law. 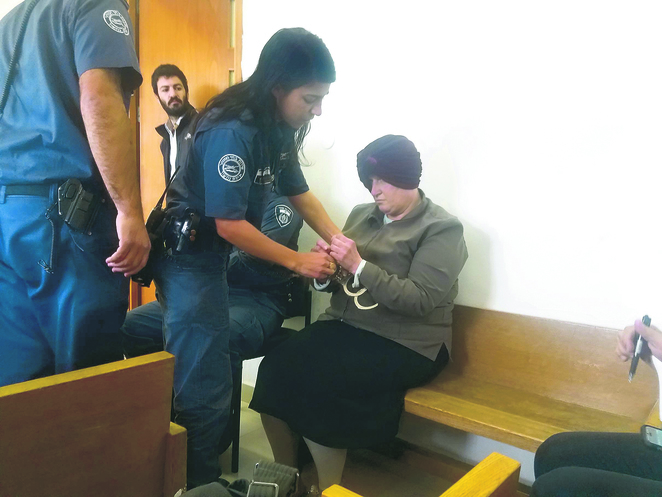 Police started investigating alleged interference by Litzman in the Leifer case several months ago, and news of the investigation became public in February. But the new information – released just as Netanyahu is about to finalise a coalition with the Deputy Health Minister’s Haredi party – has put Litzman’s future in the balance like never before.

Yael German, who ran the Health Ministry until Litzman was appointed in 2015. “An elected official who uses the systems he is responsible for in such a manner mustn’t return and mustn’t continue in his position,” German told The AJN.

The journalist who aired the details of Litzman’s actions, Raviv Drucker, is arguing that the cloud around Litzman is so serious that if Netanyahu reappoints him, the Attorney-General should intervene.

“It is the Attorney-General who must take action,” he wrote, just after his report aired on Channel 13. He noted that Attorneys-General have in the past blocked appointments when candidates were under investigation, and argued that the same should happen now.

Supporters of Leifer’s alleged victims are welcoming the calls for Litzman’s removal from the Health Ministry. “He should have stepped down a long time ago when the investigation began,” the Australian-Israeli campaigner Manny Waks said.

But advocates are concerned that Netanyahu’s likely pick for Justice Minister has jumped to Litzman’s defence. “I believe him 100 per cent,” wrote Bezalel Smotrich, of the United Right party. Smotrich said that if investigations – he put inverted commas around the word – curb his political activities “the public will lose”.

Waks noted that the outgoing Justice Minister Ayelet Shaked has refrained from commenting on the Litzman inquiry and said she will sign Leifer’s extradition order if it is granted. Waks voiced concern that if Smotrich is appointed, he could interfere with the Litzman inquiry and could prove less supportive than Shaked for proceedings against Leifer.

It has just been announced that the court will sit on September 23 to rule on whether Leifer is well enough to stand trial for extradition – one of the most hotly-contested issues in the Leifer case, and the subject of the Litzman controversy.

If Drucker’s report is accurate, the Deputy Minister’s influence hovered over key developments in the Leifer case, including the conclusion of a report on whether Leifer is healthy enough to stand trial. Drucker said that a state psychiatrist had revealed “that the managers of her clinic demanded that she write that Leifer is ill and not pretending”. Drucker reported that when the psychiatrist asked why, she told: “It’s Litzman’s instruction.”

Igor Barash, a Jerusalem district psychiatrist who declared Leifer fit to stand trial, reportedly told police he was asked to a mysterious meeting by Litzman’s chief-of-staff Haim Justman, where a man called Binyamin asked him to change his opinion.

Jerusalem District Psychiatrist Jacob Charnes has flip-flopped on whether Leifer is fit to stand trial. In April 2015, when German was still running the Health Ministry, Charnes decided that Leifer was fit to stand trial but soon afterwards – just after Litzman had become Deputy Health Minister – he changed his opinion, delighting Leifer’s defence. Drucker’s report suggested that police believe that changes in his opinion were caused by pressure from Litzman’s bureau.

As well as focusing on Leifer, Drucker’s report pointed to help that Litzman or his staff tried to offer several convicted sex offenders, mostly Charedim. This included trying to secure furloughs or other benefits for them.

According to the report, Litzman’s office put heavy pressure to get an ultra-Orthodox sex offender, who is serving 24 years for raping five women, into group therapy. Only with such therapy are furloughs possible and the same goes for shortened sentences.

Correspondence quoted suggested that Litzman’s office exerted heavy pressure on the group organisers, even asking for a list of other prisoners who were said to be ahead of the offender in question in the queue.

Debbie Sagi, a retired senior official in the prison service, took part in an on-camera interview, saying that on many occasions she saw prisoners who had been deemed dangerous suddenly getting benefits like holidays. “I never got a good explanation, and this is a red light that indicates to me that there is external involvement,” she said, adding: “Anyone saying that pressure is not put to bear is not telling the truth.”

Drucker provided a glimpse inside Leifer’s medical files, and highlighted dissonance between claims that were being made about her health and the version of Leifer that was captured by covert videos.

According to the television report, in 2016 medical experts said that she could not shower, prepare simple food or take a bus alone. In June 2017, medical experts concluded that she could not look after herself and spent most of her time in bed. By December 2017 Leifer’s family requested the appointment of a legal guardian for her body as they feared she would be unable to express herself. Yet this was the very month in which investigators commissioned by Jewish Community Watch captured her performing normal daily activities.

“Contrary to what was said, Litzman has never requested leniency or rights that are not granted by law to those applicants. No pressure of any kind has ever been applied to any element in the system, and the referral has always been in accordance with the rules of proper administration and with strict adherence to the requirements of the law.”