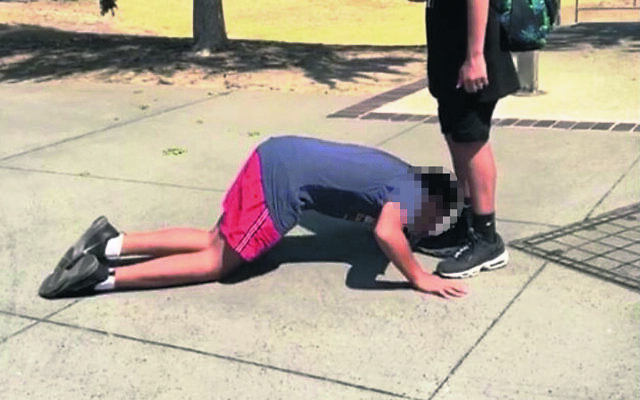 A 12-year-old Jewish student was forced to kiss the feet of a Muslim child in an antisemitic incident.

A MOTHER whose child was the victim of antisemitic bullying has now seen parts of the government’s recently compiled report following an investigation into the schools involved.

The mother, who was first told by the department that she would only be able to see the report with a Freedom of Information request, was contacted by the government last Tuesday and offered a sit-down meeting which occurred later in the week.

“There was so much redacted [and] the parts that weren’t redacted, showed no accountability on the part of the school,” she said.

When probed further by Caulfield MP David Southwick in Parliament on Tuesday about giving the parents full access to the report, Minister for Education James Merlino said “it is not appropriate that they are publicly released”.

Merlino explained these are “very sensitive” matters regarding minors, and said “the parents, have access to … come in and meet with the department and go through that report in detail”.

Chairman of the Anti-Defamation Commission, Dvir Abramovich said, “This issue has always been about justice for the victims and about the safety of our children, and I reiterate my call for Minister James Merlino to honour the promise he made to the families and to me during our October 7 meeting and to provide them with the full report.”

The review calls for, among other things, the creation of a dedicated contact desk for students and families to report antisemitic incidents, a collaborative effort with Jewish organisations to develop resources to teach students about the Holocaust and the establishment of an advisory group with representatives from Jewish groups. It also asks for an urgent review of protocols and practices in supporting schools to respond to any incidences of possible antisemitism.

The Zionist Federation of Australia, United Jewish Education Board and Jewish Museum of Australia supported the proposals in a joint statement.

“The Minister for Education, James Merlino, has taken extensive steps to address the issue,” the organisations said. “He has consulted at length with several key Jewish communal organisations.

“Senior staff of the Department of Education and Training (DET) participated in those discussions, with a view to seeing how, going forward, they can work with the Jewish community to prevent a recurrence of antisemitic bullying.”