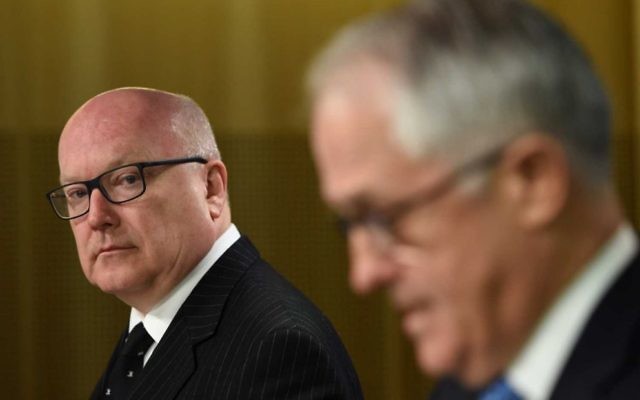 Attorney-General George Brandis (left), who has said people have a "right to be bigots", with Prime Minister Malcolm Turnbull. Photo: AAP Image/Dan Himbrechts

JEWISH community leaders have welcomed this week’s findings by Parliament’s Joint Committee on Human Rights report on the Racial Discrimination Act (RDA), which failed to reach a consensus on amending freedom-of-speech laws.

Executive Council of Australian Jewry (ECAJ) president Anton Block and executive director Peter Wertheim jointly noted, “There was no consensus … in support of amending sections 18C and 18D of the RDA, and no recommendation for changing those sections has been made,” with the committee simply listing a range of options.

“The fact that the committee did not recommend any of those options reflects the overwhelming weight of submissions from the public against altering sections 18C and 18D at all,” stated the ECAJ, whose submission strongly argued for retaining 18C.

Section 18C makes it illegal to offend, insult or humiliate someone because of their race, while 18D qualifies this for words or acts “in good faith” or works of art.

Block and Wertheim said the committee’s proposals for changes to the complaints process and for educating the community about racism “deserve to be carefully considered by the government and the community”.

The Jewish Community Council of Victoria (JCCV) welcomed the report’s conclusions, with president Jennifer Huppert stating: “We are pleased with the report. We continue to call for the Racial Discrimination Act to remain intact, to remain a line of defence against racism and hate speech.

“We also support the recommendations that call for changes in -processes around the Australian Human Rights Commission to ensure that claims with no reasonable chance of success do not proceed,” she said.

Australia/Israel & Jewish Affairs Council executive director Colin Rubenstein said he was “pleased that the inquiry found no consensus for change to the wording of either 18C or 18D – which we view as unnecessary and potentially damaging”.

“We are quite comfortable with the recommendations made for streamlining the complaint-handling process through the Human Rights Commission, including improving the HRC’s ability to quickly terminate complaints that are vexatious or have no legal chance of success,” he added.

Liberal MP Julian Leeser, who sits on the committee, welcomed its report as a “historic breakthrough on 18C”.

Leeser, who is Jewish, reflected: “This debate has been at a standstill since 2011. The bipartisan report offers the first path forward on fixing the problems surrounding Section 18C and resolving this debate. Everyone involved with this law knows that the problem is the process. The committee’s recommendations will change this.”

Shadow Attorney-General Mark Dreyfus – in a joint statement with ALP colleagues Graham Perrett, the committee’s deputy chair, and Tony Burke, Shadow Minister for Citizenship and Multicultural Affairs – hailed the findings as “a victory for common sense and for ethnic communities across Australia who made their voices heard during the committee process”.

However, the committee’s chair Ian Goodenough, a Liberal backbencher, said he supports changing the wording of 18C. “I think there is a fair level of support to make freedom of speech more accessible,” he told ABC radio.