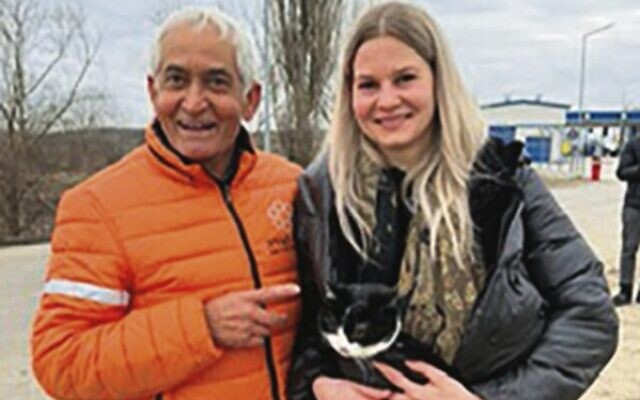 Ukrainians fleeing with their pets.

“JUST go across,” Ben Raymond was told as he flashed his Australian passport on the border of Moldova and Ukraine.

The dual Israeli and Australian citizen was volunteering with United Hatzalah to rescue Ukrainian Jews fleeing the Russian invasion and bring them to Israel.

Raymond, 70, had only just left Sydney to visit his daughter in Israel when the war broke out and, with plenty of time on his hands, decided he needed to help.

So the former Israeli army officer, who fought in the Yom Kippur War, joined the special mission and arrived in Moldova, at Kishinev airport, on a chartered flight funded by donors.

The local synagogue was their headquarters, with mattresses set up inside and army tents outside to shield refugees and rescuers from the freezing weather.

“My job was to go to the border at Palanca, the border closest to Odesa,” Raymond told The AJN from Tel Aviv.

“The main goal of the mission was to find Jewish people, however, we were helping everyone. We were wearing a Magen David on our orange jackets and a little Israeli flag.

“My job was to get the refugees as soon as they crossed the border and, of course, help them with the next step – to get onto buses and go about 3km from the border where the Moldovan government built a little area to collect all the thousands of refugees.

“It’s absolutely terrible, a humanitarian disaster. Nothing else to describe it.”

As Raymond watched another awful chapter of history play out he was struck by the trauma on the children’s faces as they left Ukraine and instantly became refugees, but there were heartwarming scenes, too.

“There are hardly any men (they have to stay behind to fight), so it’s just women, children, the elderly and, this is a very important point, they don’t leave their pets behind,” said Raymond.

“One man arrived with five dogs and two cats. He was Jewish and he took all his pets with him to Israel.

“I met a mother and daughter at the border and I saw they were struggling to move their luggage. The mother had three dogs with her and two heavy suitcases and I jumped to help them. Her daughter, she was about 30, she had two cages of cats – one on either side and a big suitcase.

“I saw she was pregnant and I asked her when she was due. She opened her shirt and, guess what? She wasn’t pregnant – she had another cat there!” 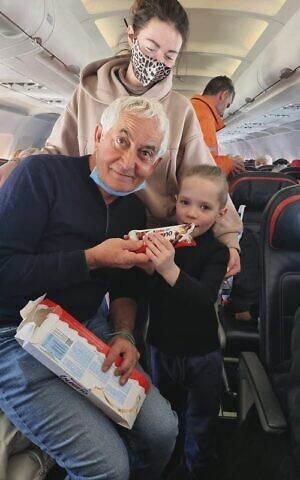 But the heartbreaking reality came flooding back when Raymond saw a young girl arrive in a wheelchair. He gave her one of the little koalas he had been handing out to children, along with lollies.

By that stage the police manning the border were letting this Israeli with an Australian passport cross back and forth to help refugees, some of whom fainted from the toll of it as soon as their feet left Ukrainian land.

“I met some old people who survived the Holocaust and never thought they’d be in this situation at their age,” said Raymond.

Few would voluntarily enter a war zone, but Raymond says he would easily go back to continue the mission.

“I was in the Israeli army, I fought in the Yom Kippur War,” he said.