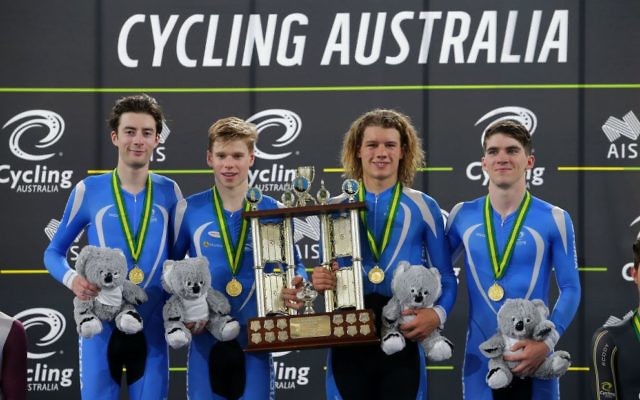 Riley Hart (far right) with his Victorian teammates on the podium after winning the U19 men's team pursuit final at the 2017 National Track Cycling Championships in the Gold Coast last week.

RILEY Hart and his three Victorian teammates not only won the Under-19 men’s team pursuit final at the 2017 National Track Cycling Championships last week, but broke the Australian record while doing so.

The 2016 Australian Jewish Junior Sportsman of the Year completed the 16 laps of the Anna Meares Velodrome with Godfrey Slattery, Isaac Buckell and Jensen Plowright in the sizzling time of four minutes, 5.34 seconds.

Runners-up Queensland finished 4.84 seconds behind, while Western Australia snuck past NSW to claim bronze, a further 2.14 seconds back.

Hart told The AJN his team went into the event as favourites, but they were forced to complete the second half of the qualifying race with just three riders, after Plowright had a nasty crash.

“It meant we had to go extra hard, but we still managed to have a narrow win [by 0.2 seconds]. So with all four riders back for the final, we were really pumped for it,” the year 12 King David School student said.

“We knew we were going to win it at the halfway mark and we could hear our coach yelling at us to keep going hard.

“Breaking the record was in the back of our minds, but I didn’t actually realise we’d done it until about four minutes after the race.

“It was such a feeling of happiness and relief.”

Due to the ongoing effects of an earlier illness, Hart said he felt “well down on energy” for the remainder of the championships, and his -results nosedived accordingly.

“That was a bit disappointing, particularly the 3000m result because I went into it as favourite, but it’s something you can’t control,” Hart said.

“But overall, in terms of the team event, it was a fantastic result.”

Hart said he is confident of qualifying for the Australian squad for the Junior Track World Championships, to be held in China in July.

“An initial team of eight will be announced next week for a training camp.

“I should make that list, and then it will be a matter of doing my best.”