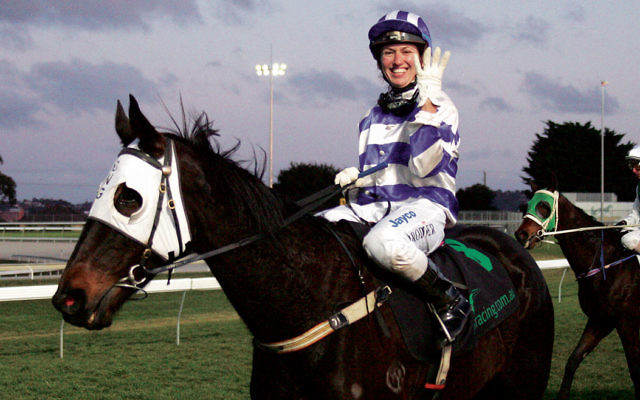 JEWISH jockey Talia Rodder has returned to the saddle after a 12-month break from racing to have a baby.

The determined jockey has worked hard to get back into shape following the birth of her son Matan and is almost back to her riding weight a month out from her return.

I did gain about 15 kilos during the pregnancy, but I’ve already shed 11, so I’m not far off,” Rodder told Racing Victoria.

“I had a caesarean, so that was the first obstacle I had to overcome, and when I first came back I was so unfit.”

Rodder stopped riding when she was eight weeks pregnant and got a job at Slattery Media selling advertising for Inside Racing.

But she desperately missed being a part of the action, largely due to the stellar run she enjoyed in the lead up to her break.

After a career-best haul of 58 winners during the 2010/11 season, she had already ridden 32 winners before pulling the pin with two months remaining in last season.

They were great results for the woman who emigrated to Australia from Israel, and started her career in Western Australia before moving to Melbourne with husband Josh, who is the racing and media executive at the Melbourne Racing Club.

“I was always going to go back to riding,” Rodder said.

“While I was off I went and found an office job, which was something different, but I just kept my head in the business.

“I kept going to the races and checking results and all that, but it was very hard because riding was the one thing I enjoyed doing more than anything else. I’m just very pleased and relieved to come back.”

Rodder headed back to Israel for two weeks not long after Matan was born and has spent the past two weeks riding six days a week with Malua Racing at Flemington.

She rode a winner at the Werribee trials earlier this week and is set for her first official race in May.