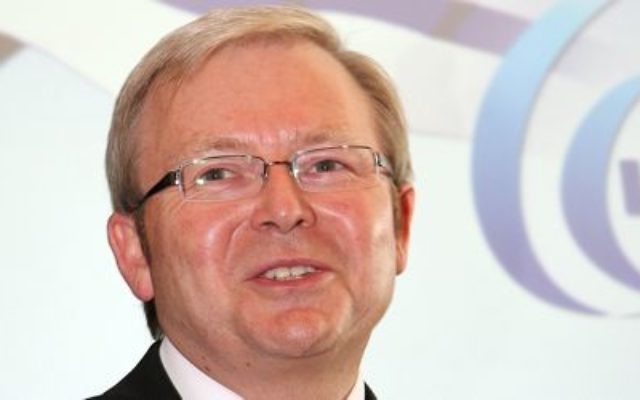 THE Zionist Federation of Australia (ZFA) has expressed concern at reports that Foreign Minister Kevin Rudd wants Australia to abstain from next month’s United Nations vote on Palestinian statehood.

The Fairfax media reported on Monday that Rudd wrote to Prime Minister Julia Gillard recommending the abstention, which it said had been interpreted as an attempt to avoid antagonising Arab nations in Australia’s campaign to gain a temporary seat on the UN Security Council.

ZFA president Philip Chester said while coverage of Rudd’s letter was still speculative, he would be very concerned if there was substance to it.

“It’s taken us by surprise,” he said.

“We had a feeling in fact that the position of the Foreign Minister was that he would oppose any such resolution.

“We’re hoping these reports aren’t correct and that he will be supporting our position and so will the Prime Minister.”

Chester said the ZFA was currently making representations to the government on the issue of Palestinian statehood “as we speak”.

This follows a series of meetings with both Rudd and Gillard held in June which he attended alongside Executive Council of Australian Jewry president Dr Danny Lamm and the Australia/Israel and Jewish Affairs Council’s Jeremy Jones, in which they presented the Jewish community’s point of view.

In response to Rudd’s letter, a spokesperson for the Israeli embassy said: “Throughout the years, Israel has enjoyed strong bipartisan support [from Australia] on the main issues that we have to address as a nation.

“Israel expects and wishes to see this bipartisan support continue on the up-coming vote in the United Nations, with respect to the Palestinian intention to seek unilateral declaration of statehood.

“Israel attaches great importance to the upcoming vote and therefore will explore any possible avenue to convince the government of Australia to support the point of view of Israel.”

The United Nations will vote next month on whether to admit Palestine as a full member state.

Late last month UN Permanent Observer for Palestine Riyad Mansour said 120 countries in the General Assembly were ready to recognise Palestine, but the resolution may be put to the Security Council where the US would likely veto it.

The Australian government has historically favoured a negotiated settlement to reach a two-state solution to the Israeli-Palestinian conflict.