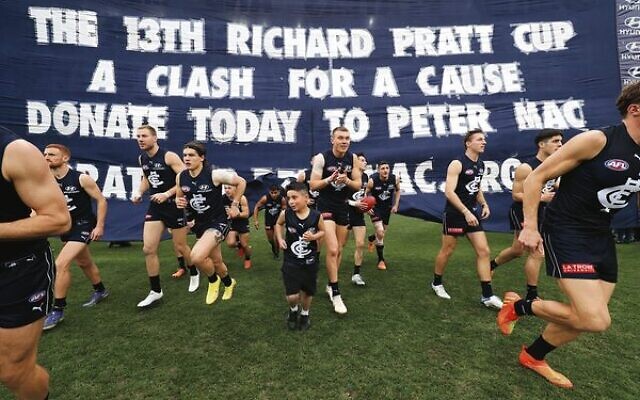 As the footy season comes to an end, footy fans of all ages gear up for the grand final. One such fan is year 2 Leibler Yavneh College student David Akoka, who ran out onto the MCG in front of 90,000 people with the Carlton Football Club on August 21. It was the final-round clash between Carlton and Collingwood, and David said he loved every moment.

This opportunity was brought about when David’s father, Danny, entered a competition run by the Carlton Football Club.

The competition was for a junior fan to run through the banner with the Carlton players for the round 23 match.

Danny Akoka explained that when they got the call from Carlton informing them that David had won the competition, plus four tickets to the game, they were very excited.

Despite the outcome of the game, Danny said, “It was a great experience to be on the MCG surface on such a big occasion. David was great and loved every moment,” adding, “The hype lived up to the expectation.”

Eight-year-old David said, “I was excited running onto the MCG.”