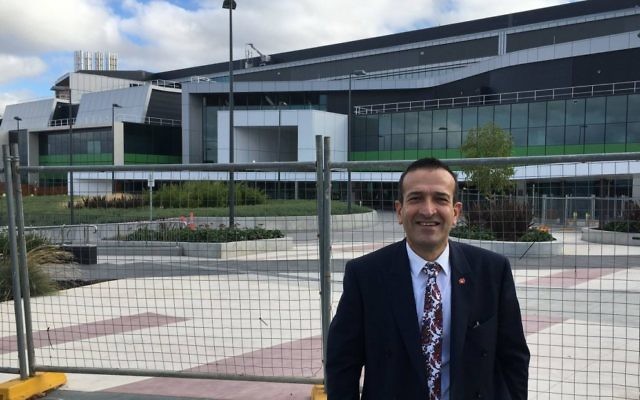 Co-convener of the SA Parliamentary Friends of Palestine, Tony Piccolo.

JEWISH leaders have expressed their deep disappointment at the South Australian Parliament’s vote to ask Canberra to recognise a Palestinian state, the first time an Australian parliament has done so.

A June 22 motion passed by the SA Parliament’s governing ALP majority calls on the federal government “to recognise the State of Palestine as we have recognised the State of Israel and announce the conditions and time lines”.

The motion, proposed by former Labor frontbencher Tony Piccolo, co-convener of the SA Parliamentary Friends of Palestine, succeeded  despite Liberal MPs trying to adjourn it.

The resolution “recognises that Palestinians have been the victims of massive dispossession for 70 years [and] acknowledges that the Palestinians have suffered under an Israeli occupation for 50 years”. It also “affirms that the continuation of settlement building … constitutes a major obstacle to peace”.

Executive Council of Australian Jewry president Anton Block said the SA government “should try to stay focused on fixing the state’s problems instead of dabbling in foreign policy issues”.

“Recognition of a State of Palestine other than in the context of a comprehensive peace agreement with Israel will only make it more difficult to resolve the core issues of the Israel-Palestinian conflict, in particular Jerusalem, refugees, borders, settlements, security and water.

“The complex arrangements that will need to be made to address these issues will require co-operation between Israel and the Palestinians via detailed agreements, not grand posturing by outside parties who have nothing to lose by making a wrong call,” he said.

Jewish Community Council of South Australia president Norman Schueler told The AJN  the SA government “has shown its amateurism and has lost sight of what it’s there for”, adding that the recognition issue “is covered already by a policy of the Labor Party thrashed out at the 2015 federal Labor conference” and Piccolo’s constituents in the state seat of Light “are horrified he’s not spending time on the immediate problems of the electorate, namely jobs”.

The Zionist Federation of Australia was “deeply disappointed by this motion, which is full of absurd misrepresentations and half-truths”, said president Danny Lamm. “Once again, the pro-Palestine movement places the blame for the impasse on Israel alone and fails to acknowledge the years of murderous intransigence on the part of the corrupt leadership of the various political entities vying for the right to represent the Palestinian people”.

Describing the resolution as “disappointing, ill-conceived and detrimental to the cause of peace it purports to advance”, Australia/Israel & Jewish Affairs executive director Colin Rubenstein said: “Even though the primary obstacle to peace is continued Palestinian intransigence, it singles out settlement building as the only obstacle worth mentioning.

“Further, blaming only Israel and conferring premature unilateral recognition, as the resolution proposes, is not only unhelpful, but also counter-productive. It only reinforces and rewards Palestinian incitement and intransigence, rather than encouraging the genuine negotiations,” he said.

“The SA Parliament has embraced long-time inaccuracies and misguided narratives. Settlements are not the main obstacle to peace, but are rather one of numerous complex issues which must be resolved through direct negotiations as part of a final-status agreement,” he said.

Australia-Israel Labor Dialogue (AILD) executive director Greg Holland described the motion as “unbalanced, biased and very unhelpful to the peace process … there’s a route for developing foreign policy within the party and that’s through the [ALP] national conference”.

He said AILD would continue to talk to state and federal ALP caucuses to try to head off any further votes of this kind by Labor state governments or a future federal government.

South Australian Premier Jay Weatherill’s office had not responded to an AJN request for a comment at the time of going to press.

Approached by The AJN, Piccolo cited interstate travel as the reason he was not able to comment about the motion before press time.