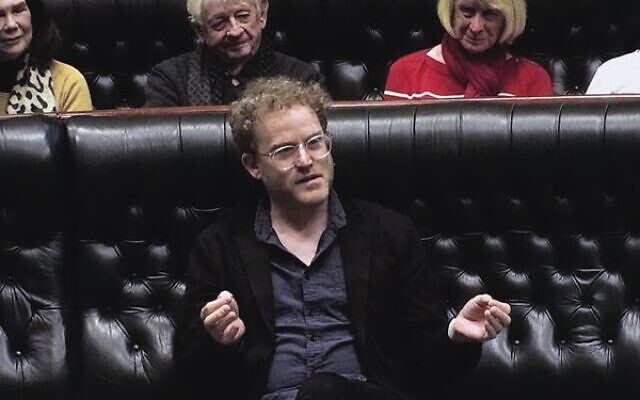 John Safran speaking at the Vivid Sydney talk on May 31. Photo: Screenshot

When asked for his thoughts on appropriate boundaries between the bringing of an individual’s belief into parliamentary debate, and its potential influence on public policy, Safran observed how “religion can add colour to debate, and on one level, I think it’s kind of cool that there’s going to be disagreements – they keep your brain alive”.

“But you’re also going to have religious people who will just work around the system, so I think it comes down to a matter of degrees.”

When handed a hypothetical, that a society decides to enact a law which infringes upon your liberty, for the explicit reason that it is in accordance with God’s commandments, would that be appropriate if a majority of people in a democracy sought that, Safran quipped “as a writer, and documentary maker, I think that would be awesome, because I could get so much material out of that!”

“And what type of law are you suggesting … like, no kosher bagels allowed?”

Longstaff quickly replied – before Safran could keep his witty spiel going – “something more serious, where it has an actual impact upon people’s lives”.

“If there are challenges to religion in America, it’s from the white American tradition about Christianity, so it’s like you’re [seen as] challenging that.

“While in Australia – just to give one instance – after World War I, when they built the War Memorial in Melbourne, it was like, should this be a religious building, with crucifixes?

“And it was like, nah, we’re going to make this absolutely important building secular.

“And I say that because, in 2022, if people were suddenly going to do this pivot, and be really publicly religious with all this stuff, I think it would just seem very odd.”

Safran also observed that “people who are religious – not all of course – often work backwards [on an issue]”.

“So, if they want more trams, they’d say, ‘listen, Jesus would have wanted more trams’ – and by the wildest of coincidences, Jesus always has the same opinions that they have!”