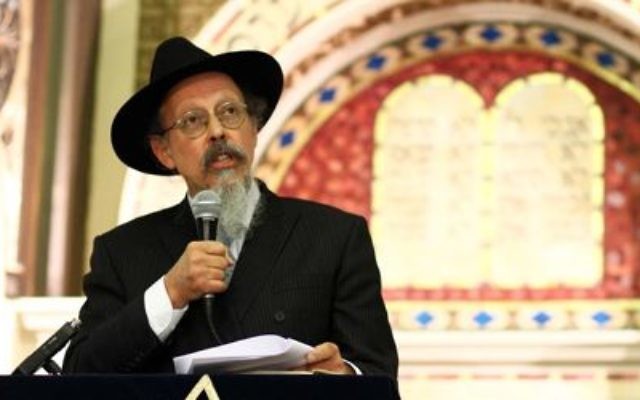 A LEADING Australian rabbi has come under fire for attacking programs that aim to prevent gay children being bullied at school.

Writing in the journal of the Australian Family Association, Rabbi Dr Shimon Cowen, convenor of the Institute for Judaism and Civilisation, claimed, “Our society and societies around the world are in the grip of a major social struggle over whether society will accept and teach homosexual behaviour as normative.”

While stating, “it is totally and unmistakably clear that the bullying of a child on any grounds is reprehensible and must be stopped,” Rabbi Cowen added, “this must be radically separated from the moral agenda of the homosexual ‘anti-bullying’ program for schools,” which he claimed “is seeking to legitimate homosexual behaviour in the earliest stages of child education”.

Referring to the Safe Schools Coalition Victoria (SSCV), which is funded by the Department of Education and trains teachers in combating bullying of students for their sexual orientation, he said, “It requires schools to teach (‘celebrate’) the acceptability of homosexual behaviour as a norm. By so doing, it flies in the face of over 3000 years of religious and cultural tradition since Sinai. In terms of the world religions and world civilisation, it is teaching something which is a moral wrong and fundamentally unethical.”

In a further criticism of the program, he said it encouraged students “to lock themselves into a sexual identity in early or pre-adolescence”.

Fellow academics at Monash University also weighed in, with Monash Education Faculty Members Against Homophobia penning a letter in which they called the views “uninformed” and “profoundly damaging”.

Meanwhile, writing in this week’s AJN, Rabbi Fred Morgan said Rabbi Cowen failed to realise that such programs “do not seek to lay down how people should behave. They are about reality – how people are in fact.”

The Executive Council of Australian Jewry distanced itself from Rabbi Cowen’s views, stating it “welcomes any government program designed to counteract bullying that has the support of victims and educators”. It described Rabbi Cowen as “highly respected in our community”, adding “that does not mean that his views on any subject are representative”.

Organisation of Rabbis of Australasia president Rabbi Moshe Gutnick, however, defended Rabbi Cowen’s view of the program. “While bullying in any form is abhorrent , including the bullying of someone because of their sexual orientation, the solution is not to ‘celebrate’ an orientation that is against Torah teaching.

“In the absurd, would one expect of an Orthodox school, where perhaps someone was being bullied for not observing the laws of kashrut, to combat that bullying by ‘celebrating’ the eating of non-kosher food?”

He stressed that the Orthodox viewpoint was not homophobic. While “there is no doubt that the Torah forbids male homosexual acts,” he said those who may choose to engage in a prohibited act “must always be made to feel welcome and they must never be made to feel that they lose their Jewish identity or ability to worship as Jews”

Dr Jonathan Barnett, convenor of Keshet, a group which plans to provide training for teachers in Jewish schools in protecting gay adolescents from bullying, said of Rabbbi Cowen’s views: “It may be one way of interpreting Torah, although I don’t think it’s the correct way, [but] I’m worried about today’s children. Do we turn our backs on them? I don’t think Rabbi Cowen means to turn our backs on them either, but it’s an issue of how we help the kids.”

Stressing that “I’m a thousand per cent behind stopping bullying of homosexual children,” and insisting “I am absolutely not homophobic,” Rabbi Cowen told The AJN this week, “Our tradition teaches us that every person possesses a soul made in the image of God, and we must have respect for persons for that reason alone.”

He added, “I most certainly do think that bullying of all children, including homosexually inclined children should be tackled in schools. The way this should be done is in ways taught by experts in the area of bullying such as Evelyn Field. She teaches the bullied child methods of ‘bully blocking’ and taking the wind ‘out of the bully’s sails’, which works for all pretexts of bullying. If, in conjunction with this, some reinforcing ethic is to be taught which is universally acceptable, it would be that every human deserves respect as possessing a special potential.”