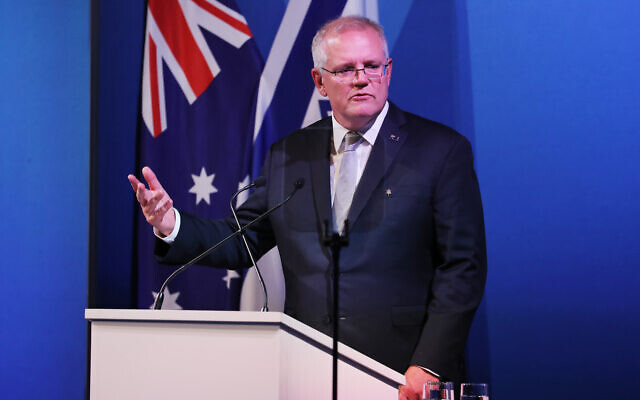 “We do not agree with the report’s characterisations of Israel, and we remain a firm supporter of the State of Israel,” the spokesperson said.

“The conflict between the Palestinians and Israel must be resolved so that peace and security can become normalised. We are strong supporters of a two-state solution, with Israel and a future Palestinian state establishing internationally recognised borders.

“We have always urged all parties to refrain from actions and statements that undermine the prospects for peace.”

It comes after Prime Minister Scott Morrison, when asked by a journalist on Wednesday if Australia would “condemn Israel” and “reassess its relationship with Israel”,  responded, “Australia has been one of the closest and strongest friends of Israel of any nation in the world, other than the United States. And we continue to be a very strong friend of Israel.”

Morrison added, “No country is perfect. There are criticisms made of all countries, but I can assure you that Australia and my Government, in particular, will remain a staunch friend of Israel.”

Meanwhile, shadow foreign affairs minister Penny Wong issued a statement in which she said, “The report’s findings are concerning, and we expect the government to review it closely, assess the situation on the ground, and make representations about Australia’s view.”

However, she stressed, “Labor does not agree with the use of the term ‘apartheid’. It’s not a term that’s been found to apply by any international court and is not helpful in progressing the meaningful dialogue and negotiation necessary to achieve a just and enduring peace.”

Wong added, “Australia must stand up for human rights everywhere. To be a credible voice we must call out human rights violations wherever they take place.

“We continue to call on all parties to the conflict to refrain from any actions that hamper peaceful outcomes for both the Israeli and Palestinian peoples.”

Meanwhile, Liberal Senator Eric Abetz and Labor Senator Kimberley Kitching, the chair and co-chair respectively of the Parliamentary Friends of Israel, released a statement on Thursday rejecting the Amnesty Report.

“Amnesty International’s report is littered with errors that rehash discredited claims from other biased reports. It’s wrong in detail and disturbing in its intent,” they said.

“Israel is a vibrant beacon of democracy in the Middle East comprised of Jews and Arabs, Druze and Christians – both secular and religious – whose rights and liberties are protected in equal measure.

“We won’t help Israel or the Palestinians by pretending things are different from what they actually are in Israel or by encouraging delusions that the concept of the Jewish state can be crushed by external forces, be they military or trade.”

They also noted their disappointment “at the insensitive and hurtful timing of the report’s release just days after the world commemorated International Holocaust Remembrance Day”.

Wentworth MP Dave Sharma, a former Australian Ambassador to Israel, also criticised the report, calling it “wrong on many levels”.

“To use incendiary terms such as apartheid without a factual basis cheapens this term and discredits Amnesty,” he said.

“It does nothing to advance the cause of the Palestinian people or their desire for self- determination. Ultimately it is a two-state solution — to which end Israel has embarked upon countless negotiations over several decades — that will secure Palestinian national rights, and achieve peace between peoples.

“Not efforts such as this which seek to discredit and delegitimise Israel. And which wrongly seek to blame Israel alone for the failure to deliver Palestinian national rights, a failure which properly belongs to the Palestinian political leadership,” he concluded.