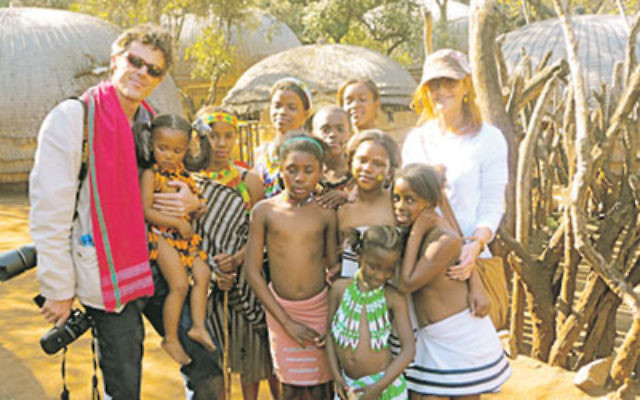 The coffee-table book was published in time for the 2008 Beijing Olympics, and was mostly sold to government officials and corporations, who used the book as a gift during the Games.

The book is now in its fourth printing and, according to Gold, has raised thousands of dollars to help orphan children in central China.

Producing Children of China involved many months of hard work, ranging from the logistics of dealing with the Chinese bureaucracy to organising photographic shoots in remote parts of the country, and this took its toll on Gold.

“Producing the China book was one of the most stressful things that I have ever done in my life,” Gold says.

“I almost had a meltdown doing the China book,” she recalls. “I’m not in the corporate world; I’m a stylist.”

So it was surprising that Gold volunteered to produce another book to coincide with this year’s FIFA World Cup in South Africa before the dust had even settled on the China book.

The key to the books are the stunning photos taken by Zordan, who has worked with Gold on children’s fashion shoots for more than 15 years.

“I was in Hong Kong in June [2009] at a huge party for the book and we were all sitting around talking about the football World Cup that would be held in South Africa,” she recalls.

“After the party, I went back to my hotel, I called Luca and asked him if he would do another book for me in South Africa to coincide with the World Cup. He agreed on the same basis – if I would produce it, write it and do everything else, he would come and shoot it.”

Gold says she returned home to Sydney and then headed to South Africa a week later. She organised sponsorship for the book prior to starting work on it and enlisted the support of prominent South African businessmen, including many from the Jewish community.

“It was 100 per cent easier this time around,” she says, adding that all proceeds go to charity.

In August last year, Gold and Zordan began work in South Africa, spending months travelling to all parts of the country to photograph hundreds of children, including Jewish kids at the Gardens Synagogue, Cape Town’s oldest shul. .

“We needed to have a balance of kids from every walk of life in South Africa featured in the book. There were Indians, Muslims, Africans, Jewish and from the different tribes,” she explains.

“These wonderful kids are very ­inspirational and motivate us all to do more to give back.”

“Luca is the guru of children’s photography – that’s his speciality. He spent several months on the book, including his holidays, all for free,” she says.

“The only time that Luca and I fought was over the selection of photos. We would have to justify our choices to each other. Sometimes it took three days to make a decision over one photo.”

Children of Africa – South African Edition was launched in New York in June at a party hosted by Jewish wedding planner Colin Cowie at the same time as its South African launch in Johannesburg and another in London.

Last month, an Australian launch was held in Sydney, where businessman and Football Federation Australia chairman Frank Lowy was guest of honour and spoke about the power of sport.,

Gold was born in South Africa but has lived in Sydney since 1975. She has worked in the fashion industry for more than 20 years, specialising as a children’s fashion stylist for magazines and advertising campaigns.

Zordan was born in Venice and moved to New York in 1993, where he lives with his wife and three daughters. He is regarded as one of the world’s top children’s fashion photographers.

PHOTO: Photographer Luca Zordan and writer Alethea Gold with children in the village of Lesedi in South Africa.