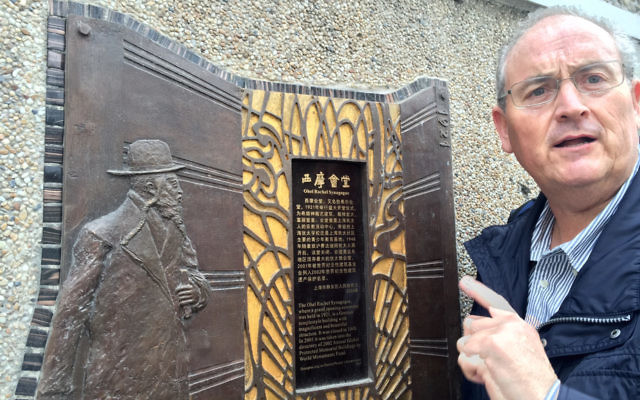 Walt Secord next to an Ohel Rachel Synagogue plaque.

DEPUTY chair of the NSW Parliamentary Friends of Israel and senior NSW Labor MP Walt Secord was recently given rare permission by the Chinese government to visit the historic Ohel Rachel Synagogue in Shanghai.

Founded in 1920 and consecrated a year later, the Sephardi shul was effectively closed in 1948 and taken over by the Communists in 1949.

It is one of only two synagogues still standing in Shanghai – out of an original six – and is the largest synagogue in the Far East.

Ohel Rachel is closed to the public, but it has been made available recently to the local expatriate Jewish population on a very limited basis on occasional High Holy Days.

In 1994, it was designated as a “protected architectural landmark of the city” and was recently put on the New York-based World Monuments Fund watch list. It is now located within a compound of Shanghai’s higher education administrative buildings.

Secord said it was a “beautiful and majestic” building, and that he was “delighted” to get to visit the historic landmark. “It was in surprisingly good shape and it must be maintained. It also gave a glimpse into the once vibrant Jewish community that existed in China before Communist rule.

“It was extraordinary to walk off the bustling streets of Shanghai to find such a beautiful synagogue completely intact,” he said.

“The view of the women’s gallery in the shul was spectacular.

“I hope that the Chinese authorities continue to protect this important site.”

Secord visited the synagogue as part of a 14-day visit to China.

He said another highlight of the trip was an official tour of Jewish Shanghai by Haifa-born journalist Dvir Bar-Gal, who lives there and is active in collecting and preserving Jewish gravestones. He has located more than 100 so far.

The tour included the Hongkou Jewish Quarter – a square kilometre which was home to around 20,000 Jews fleeing the Holocaust; Huoshan Park where they gathered; the Ohel Moishe Synagogue building, which was restored in 2007; the Shanghai Jewish Refugees Museum; and former sites of the office of the American Jewish Joint Distribution Committee and the childhood home of Michael Blumenthal, the Carter-administration official and US treasury secretary who lived there as a child refugee.