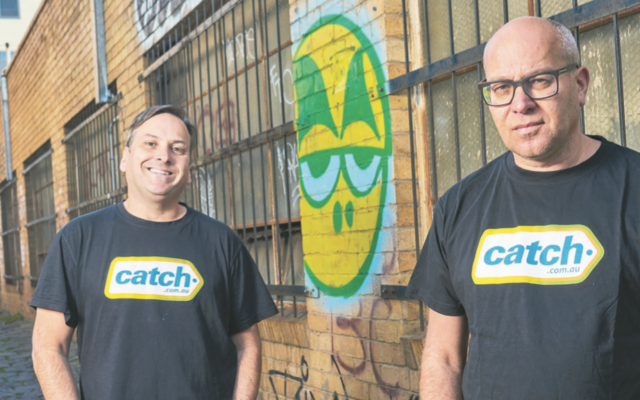 Israeli-born brothers Gabby and Hezi Leibovich pioneered online retailing in Australia with Catch of the Day, which grew from one deal in 2006 to becoming Australia’s most visited online shopping site and was sold to Wesfarmers for $230 million in 2019.

Their phenomenal success with online sites Catch, Scoopon, Bon Voyage, Grocery Run, Mumgo and Eat Now – and some not-so-successful business experiences – are told in their book, Catch of the Decade, which was recently published by Wiley.

The brothers started working on the book in December 2019 and completed writing last June during the COVID-19 lockdown. “After we sold our business to Wesfarmers, we were sitting at home not doing much and realised that our unique story needed to be written,” Gabby told The AJN.

“We also wanted to inspire the next generation of entrepreneurs and business owners and share our knowledge with the world. And one day I also want to show the book to my grandchildren and explain how Catch eventuated.”

Gabby, 50, and Hezi, 44, were born in the northern Israeli town of Nahariya, situated 10 kilometres from the Lebanese border, where their father Shloma, an electronics engineer, and mother Editha, worked in their electronics shop. In 1986 the Leibovich family moved to Melbourne and the brothers went to Mount Scopus College – Gabby in year 11 and Hezi in year 4. After completing school, Gabby went to Monash University and graduated with a degree in computer science, while Hezi qualified as a chiropractor. However, it was their love of business and entrepreneurship that soon prevailed, which started while living in Israel.

“Our parents were unusual in that they exposed us to entrepreneurial thinking from a very early age,” explained Gabby. “At the family dinner table we generally talked about how to make money.

Business was in our family’s DNA!

Living through the Lebanon war in 1982 was frightening as they often had to shelter in their apartment’s basement bunker during rocket attacks. “After experiencing bombs falling around your house, you get a feeling that nothing will stop you,” said Gabby. “So when we started out with Catch and a supplier would tell us that they didn’t want to sell us their goods because we didn’t have a retail outlet, we persevered. ‘If you try the front door and it’s closed, you try the back door, and if that is closed you kick it in.’ In business you need to find a way of advancing forward, and having that Israeli chutzpah was a great benefit to us.”

Soon after arriving in Melbourne in 1986, the Leibovich family had a stall at the Sunday Croydon market, and once Gabby turned 18 and got his driver’s licence the brothers set up their own stall at the Wantirna Sunday market selling clearance clothes.

In the book they write: “One of the more memorable market vendors was Jonno, an older guy who had been working the markets for years. He would stand on the back of his truck, speak into a crackly hand-held microphone, hold up one product at a time, and work the crowd into a fever on the premise that he only had a few in stock and once the product was gone, it was gone. The crowd would fight to give him their money! “This concept of focusing on one item at a time, within a limited time span, and spruiking it loudly to the world, must have seeped into our subconscious because those three principles formed the basis of what Catch of the Day would become.”

A few years after the markets Gabby joined his parents’ business, Panasales, an outlet in Brighton selling heavily discounted electronic appliances. He worked there full time while Hezi joined them on weekends. One day a customer showed Gabby a website called eBay, which got him thinking about selling products 24 hours a day. “With a store in the suburbs we were reliant on customers driving past, but what we discovered with eBay is that the business is scalable and you can sell at midnight to people in SA, WA or Tasmania.”

In 2004 Gabby and Hezi – who was then living in Queensland – operated independent eBay businesses from their homes. When Hezi returned to Melbourne in 2005 they pooled their businesses. “In the early days of using eBay we had issues and at one stage eBay shut us down for several weeks, which forced us to think outside the square and put our future in our own hands by launching our own website,” said Gabby.

They launched Daily Deals in June 2006, followed by Catch of the Day four months later.

Their biggest challenge was that suppliers did not sell to a company without a bricks-and-mortar shop.

“In the early days it was difficult for us to deal with the largest suppliers, and their excuse was that they only sell to businesses with a bricks-and-mortar store,” said Gabby. “One of the main reasons for our success was that we really considered ourselves to be better buyers and through our journey in Catch of the Day we built a tremendous buying machine that became synonymous with unbelievable deals. Through the concept of FOMO – fear of missing out – people were lining up every day at our site at midday to see what crazy deal we had managed to catch and by 2010 we were Australia’s most popular online shopping site.”

Over the years Gabby and Hezi developed a variety of online sites as they found new opportunities, including Scoopon (2010) for services and travel, Grocery Run (2011) for grocery items, Mumgo (2012) for the baby market, Eat Now (2012) as a food ordering app and Bon Voyage (2017) for luxury travel which soon afterwards merged with Luxury Escapes. “When Wesfarmers showed an interest in us, we knew it would be a 100 per cent exit for us,” said Gabby. In August 2019, their business Catch.com.au (formerly Catch of the Day) was sold to Wesfarmers for $230 million.

Writing Catch of the Decade was a labour of love for the multimillionaire brothers, who are donating proceeds from book sales to two charities – Good360 and SecondBite. “Privately we support Jewish charities, but since the book was written for the general public we looked for charities that touch retail, and chose Good360, that distributes goods to the needy, and SecondBite, which provides meals to people around the country,” said Gabby.“2020 was an interesting year with coronavirus, and periods of disruption and chaos led to a lot of opportunity. We realised that we are not ready to retire and as entrepreneurs we enjoy the process of building and are working on our next business projects.”