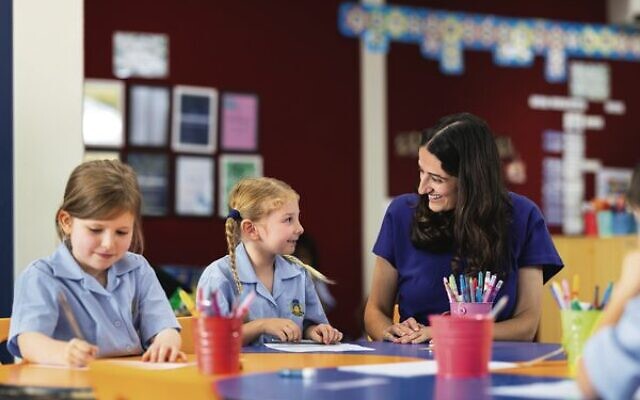 The report is about securing the future of Jewish day schools such as Masada College. Photo: Supplied

CENTRALISED fee assistance, a framework for schools to pool their resources and a “Centre for Education Excellence” are among the bold ideas proposed by a committee tasked with securing the future viability of Jewish schools in Sydney.

These challenges include declining numbers of Jewish school-aged children until 2045, net-zero Jewish immigration, property prices forcing families outside of Jewish areas, an overall trend of secularisation in the community and the affordability of a Jewish day school education.

In a report to be released today, the ERC has proposed six “big ideas” as well as a number of other suggestions to meet these challenges.

The other three big ideas are a community grants scheme initially targeted at kindergarten parents, a “scorecard” for schools to assess their performance and the formation of a “Jewish Education Alliance” to assist and coordinate in implementing the various strategies.

“This is not about clipping the wings of the schools. It is aimed at making them fly higher and more sustainably,” Gonski told The AJN.

“The schools are well run and we have worked from that foundation.”

Addressing some of the “big ideas”, Gonski said centralised financial assistance “is not novel” but very important.

“But we shouldn’t underestimate the Centre for Education Excellence,” he said.

“Parents are looking for excellence for the money that they pay. And we don’t in any way say there isn’t excellence, but we think that we can provide even greater excellence.”

On the idea of a community grants scheme, he said “taking out some of the financial hurt early is obviously going to be an extra inducement” to parents deciding where to send young children to school.

“And once you’re in, hopefully you see and like the product,” he said.

And while he admitted the scorecard could be controversial, he said “everything in life has different vantage points”.

“What happens if the scorecard actually is a good selling document for all the schools?” he posited.

“If you are just looking at what ATAR you get if you go to the Jewish school, that’s one thing. But there is a wider set of teachings that these schools are doing, and we thought the scorecard could be developed to actually show that.”

Gonski stressed that none of the ideas will work “unless those who have to work with them are involved in the actual detail”.

“The next step is to get some collaboration, [get] the schools involved to try and work out the detail and the detail implementation,” he said.

In forming the ideas, the ERC – described by Gonski as “excellent, a bright bunch of people” – assessed data from JCA’s Census 2016 and Gen17 reports alongside findings from a review by management consultancy Nous Group, who conducted a survey of the community and focus groups comprising parents of students at Jewish schools, public schools and private schools.

JCA head of planning Shari Lowe said, “We’ve known obviously for a while that education is a challenge in the community which needs to be addressed.

“Looking at the results of the census from 2016 and the results from Gen17, we could see a pattern of demographic change, which would, we believe, significantly impact the schools and their enrolments.

“So it is based on projections. The report is the basis upon which we hope we can assist the schools in achieving sustainability.”

Members of the community are invited to submit questions online which will be addressed at an online update, scheduled for April 5.

“We won’t shy away from hard questions,” Lowe said.

“This has to be an open discussion, we want the community to understand what’s available, but [also] some of the other challenges that there are.”

JCA CEO Alain Hasson said the report is “the start of a conversation and a journey for the community”.

“The takeaway is the community significantly values Jewish education [and] we see the importance of it for all of community. We don’t, regrettably, have a silver bullet to the affordability challenge but we want everyone to understand that solving these challenges will remain a priority,” he said.

“We want to engage in the discussion and we want to continue trying to support the schools and other education providers to make Jewish education more accessible for everyone in the community.”

He added, “But we also need to have – and maybe this will be controversial – a proper discussion with the community in terms of entitlement and what’s equitable and fair. Quality private Jewish education does cost something and for those that can’t afford it, the Jewish schools, donors and JCA are already doing a lot in terms of fee assistance.

“However, we acknowledge we must continue to do more and that some systems can be improved to make seeking assistance easier. It’s finding that right balance to help those families that are making sacrifices to get their kids in and who prioritise the Jewish education component.”

View the report or submit questions, by emailing queries@JDSreportNSW.com.au

Register for the Education Report Update, taking place on April 5.