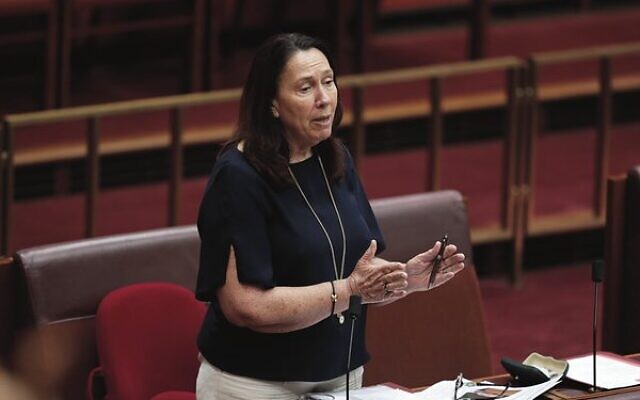 PRIME Minister Scott Morrison has rebuked a Coalition MP who accused Israel of apartheid while shadow foreign minister Penny Wong says a speech by Deputy Senate President Sue Lines accusing Israel of being an apartheid state “does not reflect the position of the Labor Party”.

Senator Lines, who will become Senate President should Labor win the federal election, told parliament last Tuesday that the recently released – and roundly discredited – Amnesty International report “confirms that Israeli policies against Palestinians fit the definition of the international crime of apartheid”.

“We are witnessing these policies enacted on a large scale through mass seizures of Palestinian land and property, forcible transfers, drastic movement restrictions and the denial of nationality and citizenship,” she said.

Deputy Nationals whip Ken O’Dowd made similar remarks, according to The Guardian. “The report has come as no surprise to me. Let’s face facts … there is a form of apartheid existing,” he said.

Morrison told The AJN this week, “I don’t agree with Ken. That’s not the government’s position. And Ken is actually not contesting the next election.”

Senator Wong said this week she did not agree with O’Dowd, Coulton or Senator Lines, “whose speech does not reflect the position of the Labor Party”.

“Labor does not agree with the use of the term ‘apartheid’. It’s not a term that’s been found to apply by any international court and is not helpful in progressing the meaningful dialogue and negotiation necessary to achieve a just and enduring peace,” Senator Wong said. “Labor is a strong friend of Israel.”

“Not only is it wrong on the facts, as anyone who has spent any time in Israel would know, but it is part of a pattern of behaviour by Labor figures who should know better but seek to dog-whistle to the anti-Israel lobby,” he said.

“If there is a change of government, she’ll need to be replaced as president of the Senate by someone more diplomatic,” he said.

But Labor Macnamara MP Josh Burns said “unhelpful comments have been made by MPs on both sides of the political divide and the Liberal-Nationals should call out those comments on their side just as Labor has called it out on our own”.

“Senator Lines has a history of regurgitating some of the most extreme anti-Israel talking points,” he continued.

“While it has been made clear that Senator Lines does not set Labor’s foreign policy and her contempt for Israel is at odds with her party, it is nonetheless concerning that the Deputy President of the Senate should hold such views.”

Australia/Israel & Jewish Affairs Council executive director Colin Rubenstein said, “Unfortunately, Senator Lines is part of a group of Labor MPs who for years have seized on any opportunity to demonise, vilify and misrepresent Israel.”

He added that “O’Dowd’s hostile comments on Israel were as unacceptable as they were predictable”.

The AJN asked Foreign Minister Marise Payne’s office for comment on O’Dowd and Coulton, but a response was not received by press time.