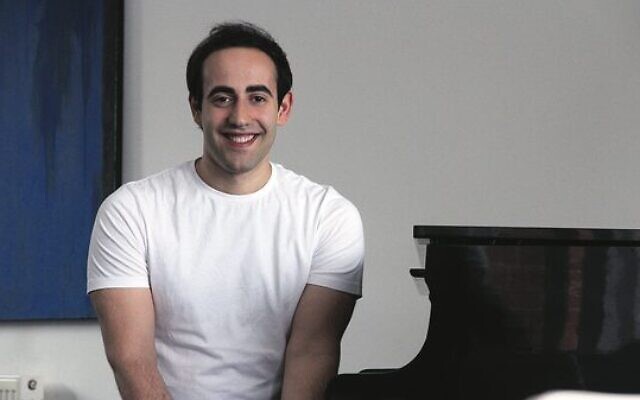 When Jess Newman was 16 years old, he taught himself to play his sister’s keyboard. And the rest, as they say, is history.

The composer and lyricist has been fascinated with music ever since. Graduating from Bialik College in 2011, Newman went on to study musical theatre at NYU.

He has also recently written the music for Senser, a new Australian work by Brittanie Shipway, who Newman has worked with in the past.

Explaining that Shipway approached him to write the music for the production, which poses the question “What would you risk to hear a song one last time?” and encourages audiences to consider how to be true to themselves while threatened by the world around them, Newman said that he admired the storyteller and artist, saying, “I would follow on her coattails anywhere.”

He explained that it all started with well-known Jewish composer Stephen Sondheim.

“I started listening to Stephen Sondheim and getting inspired by musical theatre, and I started to understand how thrilling musical theatre could be as an art form and that it was something that I wanted to write,” he told The AJN.

“I always loved music growing up and I went through phases of wanting to be Billy Joel and David Bowie. And then I realised that my place in music – I still love playing music – but it was principally as a storyteller through song.”

Which is exactly what he’s doing.

When asked whether he had a light-bulb moment when finding his feet composing, Newman explained that he believes every young composer begins by imitating their idols.

“I started by discovering how songwriters I admired wrote their harmonic language, how they use words. I think it was a series of moments and insights along the way, realising that you have to make mistakes to see what does, in fact, work,” he said.

“As far as a light-bulb moment, I think the first time I heard Sweeney Todd, and Sunday in the Park with George, I thought, Oh, wow. There’s something really interesting going on here. I started to see myself as kind of a musical forensic investigator where I was like, how exactly is he doing that? How are you creating that effect?”

For Newman, the story comes first, which is how he wrote the songs for Senser.

“It’s really important that I have a lot of discussions with my collaborators before I put pen to page so I can really grasp the context I’m writing in,” he explained.

Newman describes Senser as a celebration of music and theatre, intended to be a thought-provoking evening, questioning how society can balance out individuality with the conformity to norms.

“We’re hoping that audiences have a fun time, but that it also provokes them to think about where they stand and what ideas have been dictated to them – what do they believe,” Newman said.

Encouraged to immerse themselves in the evening, the production presents a futuristic world to theatre goers where music is outlawed, raising interesting questions about what our actions in the present mean for future generations.