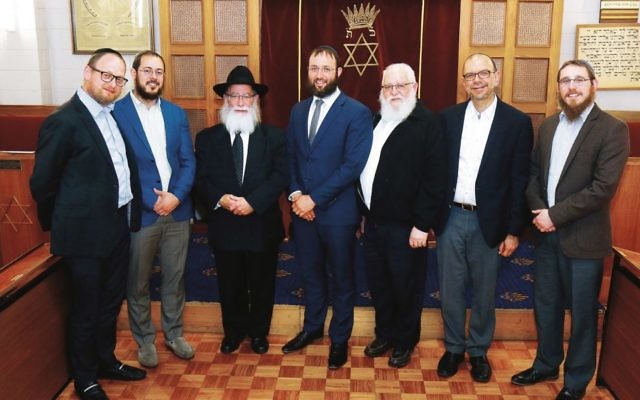 Some of the RCV executive and how they voted: Rabbi Moshe Kahn (against), Rabbi Chaim Cowen (for), Rabbi Mordechai Gutnick (for) Rabbi Daniel Rabin (against) Rabbi Phillip Heilbrunn (for), Rabbi Ralph Genende (against, resigned), Rabbi Shmuel Karnowsky (against). Photo: Peter Haskin

A RABBINICAL Council of Victoria (RCV) member quit the body’s executive and the president apologised within days of an RCV statement urging people to vote against same-sex marriage in the upcoming postal survey.

Urging citizens to vote no, the statement read, “Our Torah clearly upholds traditional heterosexual marriage as the ideal family unit and we are concerned regarding the impact that a change in the definition of marriage will have upon the strength of this fundamental societal building block.”

As reported in last week’s AJN, it also expressed fears over “the impact such a legislative change may have upon the education system and religious freedoms”.

“The RCV should not have told people how to vote and refrained from making a divisive statement,” Rabbi Rabin said. “The statement has caused immense anger and pain and has alienated many who already feel isolated within the community.

“I deeply regret the hurt that has been caused and as president of the organisation I sincerely apologise for this.”

Rabbi Genende revealed he “was strongly opposed” to the RCV releasing the statement.

“In this case I think that these wise men made a very unwise decision; one that fails to distinguish between civil and religious marriage and fails to recognise that a plebiscite is a secular issue to be settled by the free vote of its citizens,” he said.

“This is a secular, civil matter, not a religious one; rabbis tread on dangerous ground when they tell people how to vote.”

The AJN can reveal that Rabbi Moshe Kahn, who said that rabbis do not need to “make proclamations and statements that are divisive”, and Rabbi Shmuel Karnowsky, who also apologised last week, also voted against releasing the statement.

“It is divisive and damaging and is also likely to further alienate many others from Orthodoxy, if not Judaism itself,” the pair said.
“Caulfield Shule stands by its reputation of being inclusive, speaking out about injustice, building tolerance and drawing people closer to Judaism in a way that is personally meaningful.”

And the fallout continued when Rabbinic Council of Australia and New Zealand (RCANZ) president Rabbi Yaakov Glasman said the RCV’s position on the debate is valid, however they should not have been telling people how to vote because the issue is deeply divisive.

Following Rabbi Glasman’s statement, Rabbi Cowen resigned from RCANZ. “Taking a public position against the RCV on a matter which is clearly stipulated in Torah and codified by the Rambam, embraces a corrosive groupthink mentality which seems to be concerned more with popularity than integrity and fidelity to our Divine mandate,” Rabbi Cowen said.

“While I can fathom the reticence of certain rabbonim to publicly take a stand on this issue in the face of elements of society baying for blood, I cannot fathom how a rabbi, let alone a rabbinic organisation, can publicly condemn the one voice that has had the confidence to stand up on as clear-cut an issue as
same-sex marriage.”

“He has cast himself as the custodian of Orthodox Jewish values and taken to the radio and posted press releases on Facebook encouraging people to deny the LGBTQI community what, in my opinion, are the most basic of human rights.

“I understand the idea of marriage equality is challenging for some people. I even understand people voting ‘no’ for that reason.

“What seems strange to me, is someone with literally nothing invested in the outcome, rallying others to the cause.”

Adding its voice to the condemnation of the RCV, the Executive Council of Australian Jewry also issued a statement in which president Anton Block said, “There is no basis for believing that a change to the civil law definition of marriage would be a potential threat to the rights and freedoms of religious institutions and leaders to conduct religious marriages or to affirm religious teachings about marriage.

“Religious marriages are outside the scope of the Marriage Act, which relates only to civil marriages. It is alarmist to suggest otherwise, and wrong for the RCV to use its authority in religious matters in this way.”