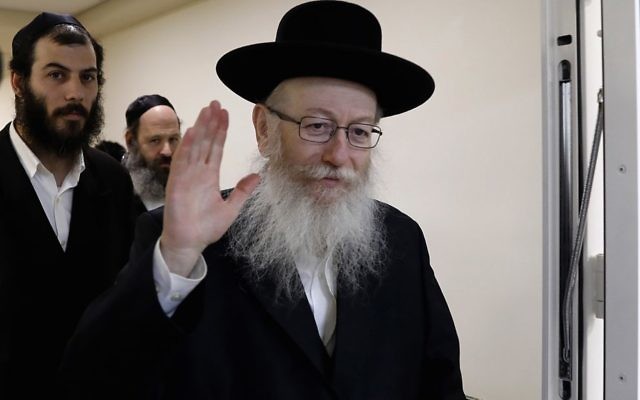 ISRAELI ministers are breathing a collective sigh of relief, after they averted a coalition crisis and a flare in tensions with the country’s Charedim.

Yaakov Litzman resigned his post as Health Minister on Sunday, saying that the desecration of Sabbath laws by the state and state-owned companies had become intolerable.

“In all generations, the Shabbat has kept us, and it is the basis of the covenant between the Jewish People and God,” said Litzman, of the United Torah Judaism party, going on to claim that it has been turned into a day for railway repairs “including unnecessary work done purely to anger people”.

Claiming that the level of Sabbath-desecration by the state violated the coalition agreement, Litzman resigned, sparking fears that his party could leave the coalition, followed by the other Charedi party Shas, prompting elections.

These parties control 13 of the coalition’s 67 seats between them, so without them the government would lose its majority.

The Charedi media had been buzzing for weeks with reports of work taking place on Shabbat on Israel’s railways and elsewhere, and Litzman resigned after receiving instructions from senior Charedi rabbis to do so. He said that he views himself as an “emissary” of the rabbis.

Litzman claimed that work isn’t happening for the sake of safety, which would justify Sabbath labour under a Torah rule called pikuach nefesh.

“It is pikuach money,” he said, suggesting that Shabbat is being used for work simply to save money.

After marathon talks with coalition officials, he agreed to stay on as a deputy minister, if the government advances new steps to limit business on Shabbat.

The compromise calmed anxious ministers, but it cast a shadow over what they hoped would be an upbeat week for the government.

Wednesday was the 70th anniversary of the United Nations partition vote, (see pages 14-15), an occasion marked a day earlier when representatives of 60 countries gathered in the New York hall where the vote took place.

He went to the swearing-in of newly re-elected Kenyan President Uhuru Kenyatta, and met nine other African leaders, from Tanzania, Uganda, Zambia, Ethiopia, Nigeria and elsewhere.

During his day-long trip he announced that Israel will open an embassy in Rwanda, as part of the “expanding Israeli presence in Africa”.

The domestic drama with Litzman caused widespread confusion, especially as the Charedi legislator was keen as part of the compromise solution to downgrade his political office from minister to deputy minister, while most politicians seek to upgrade their positions.

Litzman believes that being a tier-two official alleviates him from responsibility for Sabbath desecration by the government.

On a practical level the deal that he cut will give the Interior Minister, who is also Charedi, a chance to strike down bylaws that are enacted to give businesses greater ability to operate on Shabbat.

Once the compromise was reached, analysts were left bemused, wondering what had prompted the showdown.

He said that the Charedi parties are “getting the best terms and the best budgets” but “they know that Bibi is easily pressed” and wanted to flex their muscles.

Defence Minister Avigdor Lieberman was equally sceptical about motivations, saying that there was “no connection” between Jewish values and the conduct of United Torah Judaism.

But Litzman insisted that matters of principle were addressed in the compromise.

“I resigned because I had to resign,” he said.