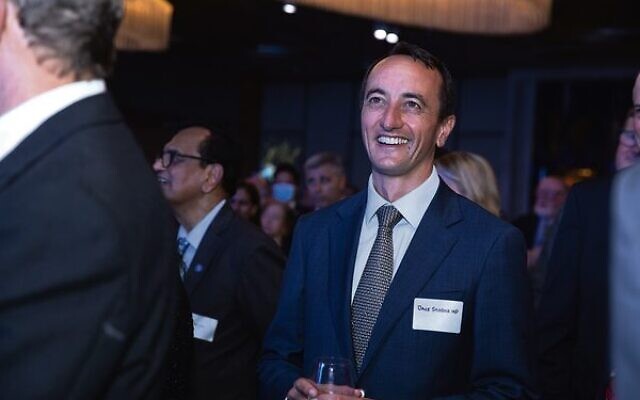 WENTWORTH MP Dave Sharma has vowed to continue standing up for the Jewish community should he retain his seat for the Liberals.

Sharma is being strongly challenged by independent candidate Allegra Spender, but he says his proven track record when it comes to the Jewish community in Wentworth is unique.

“I’ve shown that I’m someone who will stand up when the Jewish community needs it most, not just to get their favour and tell them at election time that you’ll be a good friend,” Sharma told The AJN.

“When the friendship really matters is when you stand up when the community is under attack.

“When the BDS movement manifested here with the boycott of the Sydney Festival, I was out very quickly standing up against the boycott and against attempts to delegitimise Israel.”

Sharma says his time spent as Australia’s ambassador to Israel, from 2013 to 2017, has informed his role when it comes to the Jewish community.

“The Jewish community’s concerns are obviously the safety and security of their own community,” he said.

“More broadly is the level of security within Australia. The worrying rise of antisemitism across Australia, but particularly on university campuses and at times in the media … is making for a less welcoming and friendly environment for our Jewish Australians. We’ve seen that in the last week with the University of Melbourne Student Union and more broadly with defacing election material with swastikas and Nazi symbols and increasing use of language that demeans or diminishes the Holocaust in public discourse.

“I’ve helped secure a large amount of funding for the community in Wentworth to help build security infrastructure for the Jewish community and support the work of the CSG.”

Sharma has also increased the funding for Holocaust education to make sure “Australians understand and are aware of the history of the Holocaust”.

Sharma says one of the highlights of his term has been the government adopting the IHRA Working Definition of Antisemitism, but he wants to see public institutions such as universities and public broadcasters adopt it too.

Should he be re-elected he says he will continue to improve the safety and security of the Jewish community, while more broadly addressing the areas of concern in Wentworth.

“We’re already one of the most densely populated parts of Australia and I don’t think people want to see higher density housing going in because our infrastructure is limited,” Sharma said.

“The environment remains a big issue and what I’m detecting is people are glad we’ve committed to net zero by 2050, but we probably want to get there a bit faster.”