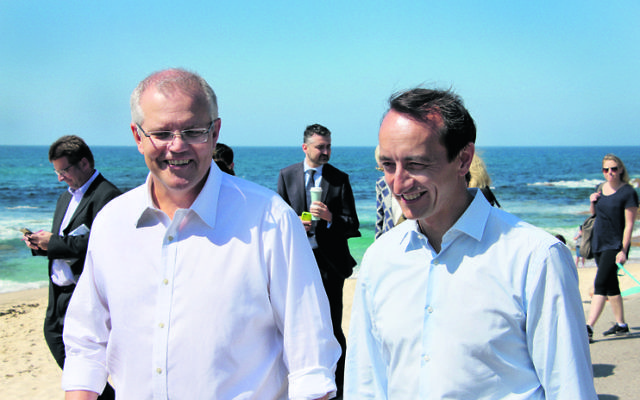 IT’S game on in the Wentworth by-election, set for October 20.

Sharma wasted no time hitting the campaign trail after prevailing in a marathon preselection battle that went into the early hours of last Friday, appearing with Prime Minister Scott Morrison at Bronte Beach later that morning and spending the weekend at various locations around the electorate.

“It’s been a fast start. And it will be an intense campaign obviously, it will be a tough seat for us to win,” he told The AJN.

He said the upcoming by-election will have “significant national consequences”.

“A vote for Liberal in Wentworth is a vote for political stability in Canberra and getting on with the job of government,” he said.

“If we don’t win this by-election I think the prospects of an early election are high.”

He identified three issues of importance to the Jewish community in Wentworth.

On communal security, he said he would work “very closely” with law enforcement, state and local governments and the community itself to make sure “everything that is needed is provided”.

On Jewish education, he said, “One of the great strengths of the Jewish community is how connected it is to Israel and to Zionism … I’d like to make sure that Jewish families can still get their kids a good and affordable Jewish education to connect them to their faith and to Israel.”

Finally, he said it was vital to be vigilant against antisemitism.

“Australia has a good record but it exists,” he said, “It’s a growing phenomenon in places like Europe and America and we really don’t want to see it take root or become worse [here].”

Currently living on the North Shore, Sharma plans to move into the electorate before the ­by-election.

“My whole professional life has been about going somewhere and becoming a local. I did it in Israel, I got immersed in the life of the community, the institutions, the friendship and the people, and I’d bring the same attitude and openness and accessibility to Wentworth,” he said.

“I think people would see me as a local very quickly.”

Phelps told The AJN that running for federal Parliament “was the last thing on my mind three weeks ago”, but a growing number of constituents had asked her to run since former prime minister Malcolm Turnbull’s ousting.

“I think it is extremely important that Wentworth selects a local member who understands local issues, who knows their way around the electorate, who knows the people, who knows what’s important to them,” she said, adding, “I have very strong connections to the local Jewish community and have done for the last 20 years.”

She said there are “a broad range of concerns” in the electorate, including the need for a second public high school, fast-tracking investment in renewables to combat climate change, ensuring security for Medicare and making sure changes to investment and superannuation policies don’t unfairly affect voters.

She added, “We need to be a more unified country. We need to stop marginalising vulnerable groups and we need to treat everyone with respect and make sure everyone has equality of ­opportunity.”

On Middle Eastern issues, she said, “Being Jewish I strongly support Israel’s right to defend itself,” and rejected prematurely recognising a Palestinian state.

Labor’s Tim Murray was also unequivocal in his stance on Israel, highlighting the need to maintain bipartisan support and to “respect Israel’s borders and its right to defend itself”.

“I do not support the NSW Labor people that advocated for an independent recognition of Palestine. I don’t believe Bob Carr has an informed point of view,” he said.

“I would be an advocate within the party for Israel and should I be elected, one of the first things I’d like to do is go to Israel.”

Murray said he was glad to be running against Sharma, who he described as “decent” and a “nice guy”.

“I think the tone of the campaign will be very civil,” he said, qualifying, “We’ll be fighting on policy.

“What I’d like to hear from the Liberal candidate is: what are you going to do about climate change?

“Will you give us a comprehensive new public high school in this area? Will you help us to make housing more affordable for young people?”

He added, “If you look at Indigenous inclusion, the Labor party clearly supports the Uluru Statement, the Liberal Party doesn’t. And in an electorate like this, it’s a progressive community and the Liberal Party is no longer representing their points of view.”