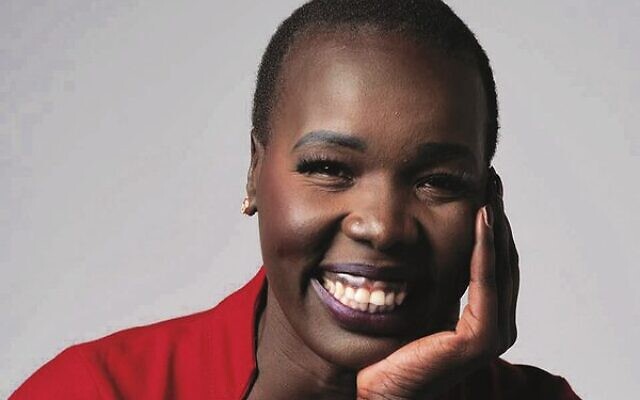 Habonim Dror and Kehilat Kolenu hosted their annual Tikkun Leil Shavuot at Beit Habonim last Saturday. It was an evening of learning and discussions, and of course a lot of cheesecake.

Keynote speaker, Nyadol Nyuon, a human rights lawyer and social activist who spoke about her experiences as a refugee, unpacked topics like freedom and democracy.

The theme of this year’s event was “revolutions and revelations” and speakers interpreted this into their interactive speeches however they liked.

Rabbi Ralph Genende from Kehilat Kesher who interviewed Nyuon in a Q&A, said, “It was a joy to meet and to have a dialogue with her; her humanity and humility lit up the evening, her tone was spot on and her eloquence a delight.

“I spoke about Shavuot as a festival with the critical themes of identity, covenant/treaty, peoplehood, refugees (from Egypt) morality and freedom.”

During the Q&A Rabbi Genende and Nyuon also disccussed topics such as war, home and identity.

Nyuon, who grew up in Ethiopian and Kenyan refugee camps, and has now lived in Australia for over 15 years, reflected on where home is for her.

Rabbi Genende reflected on how Nyuon’s story resonates with the Jewish people, as Nyuon discussed being part of Australia yet standing out as a six-foot-tall black woman.

Rabbi Genende said he invited Nyuon to speak to young Jews on this festival “because her story connects to our Shavuot story, her challenges of the loss of freedom and racism and issues of asserting a minority identity echoing ours as Jews. I invited her because so many, if not the majority of young Jews identify with social issues.”

Monique Lustig, who is on the Judaism Committee and a leader at Habonim, was heavily involved in running the event and said Nyuon’s words were captivating to an audience of over 200 people.

“The room was silent with people listening … I think she could have spoken all night,” she said.

Most attendees were high school students, in their late teens or early twenties.

“It was a community event that helped bring people together who otherwise wouldn’t be engaged with Tikkun Leil,” Lustig said.

The event, in partnership with a range of other Jewish organisations including Kehilat Kesher, Netzer, Skif, Stand Up, and Hashomer Hatzair also featured First Nations woman Aunty Alison G Fuller and journalist Raf Epstein among many others.

Lustig added that it was nice to come together following last year’s venue restrictions due to COVID-19 and a Zoom event in 2020.

“There was such a diverse range of speakers … and also people with all expressions of Judaism and beliefs,” she added.