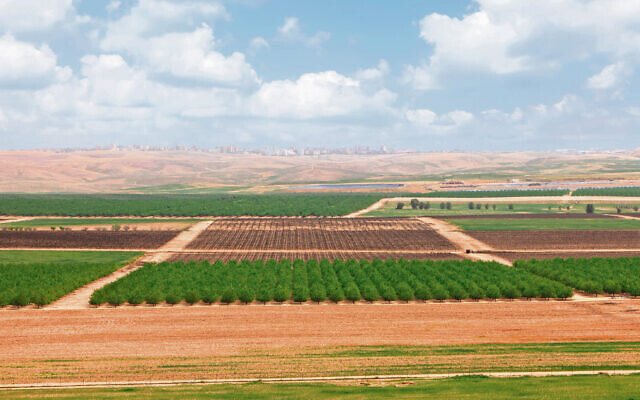 THIS week’s parasha, Behar, opens with the laws of sh’mitah, which as Rashi emphasises had their origins at Sinai – long before entry into the land.

The Torah provides that each seventh year, land in Israel must lie fallow and most agricultural work is not permitted. Even in the contemporary era, when the majority of Jews do not live in Israel (a phenomenon that may well soon pass – with far-reaching halachic implications), the laws apply – at least rabbinically. The year 5872 in which we currently find ourselves is one such sh’mitah year.

There can be no doubt that for modern-day Israel, the laws of sh’mitah are among the most problematic aspects of halachah. From the outset of Zionist agricultural activity in the 19th century, sh’mitah restrictions concerned observant Jews. However, to ignore those laws was out of the question – particularly in light of verses in the Torah that imply that exile is a consequence of breaking sh’mitah laws. (See Vayikra 26:34).

For the sh’mitah of 1888/9, Rabbi Yitzchak Elchanan Spektor of Kovno proposed a novel halachic solution that became the subject of much controversy. Colloquially known as the “heter mechirah – a permit based on sale”, it is superficially reminiscent of arrangements for chametz over Pesach. The idea was that the land should be sold to a non-Jew with a proviso that it return to Jewish ownership once the sh’mitah was over. It would then be possible to rely on halachic leniencies applying to land within the borders of ancient Israel not Jewish-owned. But already in 1889 major controversy erupted between the farmers of Ekron/Mazkeret Batya and the administrator appointed by Baron Rothschild in regard to the early agricultural settlements. When those farmers opted for a stricter observance of that sh’mitah, as per the ruling of the rabbis of Yerushalayim, the administrator opposed their decision, pointing to the heter. Ultimately, the farmers prevailed but they had paid a heavy price – in poverty, illness and the loss of the goodwill.

Albeit that from the outset the heter mechirah was defined as a temporary solution, in practice this solution, strongly supported by Rabbi Abraham I Kook in the interests of developing Jewish agriculture (but also as a “hora’at sha’ah” – simply “meeting the needs of the time”), has been reapplied each sh’mitah year until the present. August 2021 saw the formal sale for the current sh’mitah year, to which some 7200 farmers signed on.

There are, however, significant problems with this solution. The halachic and philosophical principles that are opposed to any “sale” of our land aside, sale of land away from Jewish ownership as a “solution” to sh’mitah prohibitions is also halachically problematic per se. Even if any such sale on a temporary basis is halachically valid, it does not provide a blanket permit for all types of agricultural work. And that aside, how can those who believe in Zionism – accompanied by the rebirth of Jewish agriculture and self-sufficiency in our land – even contemplate such a move, particularly on a broad scale?

In the context of these laws, the early days of the state saw Kibbutz Chafetz Chaim begin to develop the now widely used hydroponic techniques, whereby vegetables are grown in baths of chemical solution rather than in the ground.

This now much more widely utilised technique for growing cherry tomatoes, cucumbers and so many other vegetables provides a partial solution to the sh’mitah problem – within Israel and utilising Israeli Jewish labour. There is also the halachic reality that the boundaries of Israel today extend beyond the ancient boundaries to which the halachic restrictions apply. Herein too lies a partial solution that benefits southern Negev communities – although the loss of the Gush Katif settlements in 2005, now regretted for so many other reasons, minimised the amount of such produce available on the Israeli market.

The impact on the livelihood of farmers and Israeli agriculture as a whole aside, there is also the issue that the availability of only limited quantities of produce grown in halachically acceptable ways will impact on the price of the produce available. Imports – referred to as “yevul nochri, produce of gentiles” – can partially mitigate the issue, but this too is problematic in leaving many Israeli farmers “high and dry” as well as opening up the problem that once established, any new sources of competition for Israeli farmers from imports may well continue. But the need for a more widely applicable solution remains.

In recent sh’mitah years an increasingly popular solution is Otzar Beit Din, effectively following the ruling of the late major B’nei Brak halachic decisor, Rabbi Avraham Yeshaya Karelitz, known as the Chazon Ish. Effectively it is a distribution system run by a rabbinic court who serve as agents of the consumer. They take over the farms for the year and all of the harvesting, transporting and distributing that needs to be done. Vegetable and cereal produce is planted during the sixth year before sh’mitah starts and picked during the seventh year. Shoppers don’t pay for the produce, they only pay for the labour involved. However, in what some see as a disadvantage, the produce has “k’dushat shviit” (literally, the holiness of the seventh year), and must be treated as holy, meaning certain detailed laws apply to its usage, disposal or wastage. Such is also the status of tree fruit crops that ripen during sh’mitah, obviously on trees planted way before sh’mitah. Nevertheless, special stores are set up all over Israel with Otzar Beit Din produce to serve interested customers; such produce is also available at markets such as Machane Yehuda in Yerushalayim. An organisation called Otzar Ha’aretz has finessed the issues involved to facilitate purchase of relevant produce by signed-up members.

Indeed, like so many aspects of life in the 21st century, Israeli agriculture is coming to grips with ancient halachic principles. However, Torah-observant visitors to Israel this year need to be aware of the issues. Those issues also have relevance to exports which may arrive in Australia until well into 2023, and kashrut authority guidance should accordingly be followed in regard to their purchase and consumption.