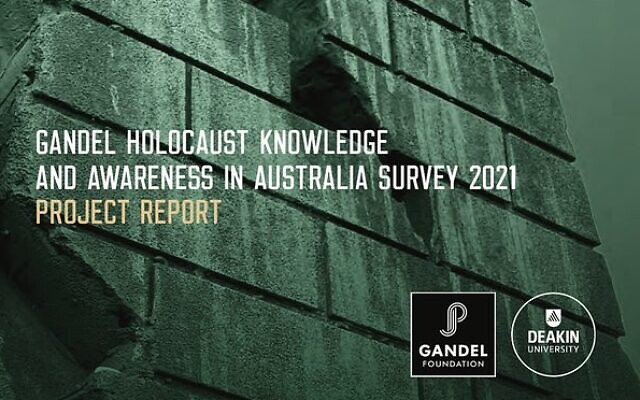 The front cover of the study released this week.

Almost one in four Australians over 18 has “little to no knowledge” of the Holocaust, and for millennials, it’s one in three. But a vast majority of Australians believe in the value of Holocaust museums and teaching the Shoah in secondary schools.

These are among many findings from a landmark survey of Australians, gauging the public’s knowledge and awareness of the Shoah, and their attitude to Jews and to antisemitism.

The survey also found those with greater Holocaust awareness and knowledge display more care to Australians of other religions and to First Nations Australians.

The results of the Gandel Holocaust Awareness and Knowledge in Australia Survey will be officially released today (January 27), International Holocaust Remembrance Day (IHRD), and key findings and recommendations will be presented at tonight’s IHRD national online commemoration hosted by the Australian Holocaust Museum Alliance.

With the Australian government now a full member of the International Holocaust Remembrance Alliance (IHRA), the time was right for a national survey, said Gandel Foundation CEO Vedran Drakulic.

During September last year, a set of 70 questions was put to more than 3500 people, making it the largest poll of its type ever done, and has been compared to studies in the US, Canada, the United Kingdom, France and Austria.

“88 per cent of Australians agree that we can learn lessons for today from what happened in the Holocaust – to me that’s massive,” he said.

Gandel Foundation chairman John Gandel stated, “The message is clear – Holocaust knowledge and awareness are directly associated with a more caring and cohesive society. Clearly, Holocaust education through schools, museums and centres will strengthen the very fabric of our society.

“The Holocaust holds an enduring relevance for the world today. We are committed to preserving the memory of the Holocaust and to helping future generations learn about the need to protect and uphold human rights, so they can become a force for good in this world. Findings and recommendations from this kind of research can help us to achieve that goal.”

The full report of the Gandel Holocaust Awareness and Knowledge in Australia Survey can be accessed at Gandelfoundation.org.au