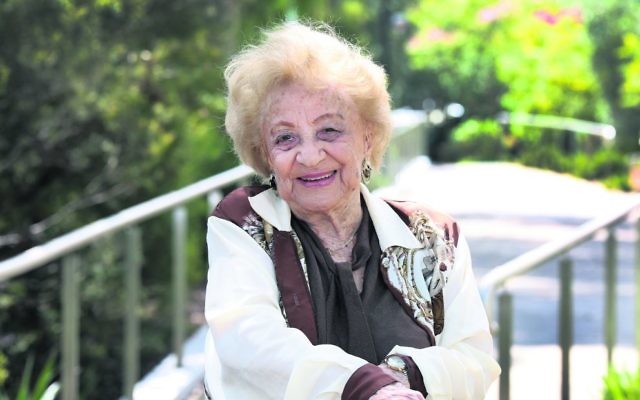 Lena Goldstein, pictured ahead of her 100th birthday earlier this year, passed away peacefully in her sleep on Tuesday night. Photo: Noel Kessel

TWO weeks after lighting a candle at Yom Hashoah, 100-year-old Lena Goldstein died peacefully in her sleep on Tuesday night.

Goldstein, who was born in Lublin, Poland, in 1919, lost both her parents during the Holocaust.

After being liberated in 1945 by the Russian Army and moving to Australia, Goldstein made it her life’s mission to make sure that no one would forget the horrors of the Holocaust.

She gave the keynote address at the 2013 Yom Hashoah commemoration and retold her story to thousands of school students and other visitors as a volunteer guide at the Sydney Jewish Museum and for Courage to Care.

“Every time I speak there’s a moment where I can’t talk any more. I don’t know why,” Goldstein said recently.

“I always thought that if you talk so many times about something it becomes normal. But it doesn’t.”

She recently told The AJN about a heartwarming moment as a volunteer. “Once there were three Muslim girls who came up to me [after a lecture], and they started kissing me and thanking me, and said they found out about something they didn’t know about because nobody told them what happened in the Holocaust.

“I could see they had been changed by my lecture.”

Goldstein told The AJN that in the ghetto, she found humour in her darkest hours by writing a satirical newsletter while crammed into a bunker with eight other Jews, in the hope that providing a light-hearted spin on an unbearable situation would raise their spirits.

“The bunker was about the size of this kitchen here, and maybe a little bit wider,” she said.

“[Some of the Jews] said they were going to leave because they couldn’t live like that.”

“It helped me and it saved the lives of nine people,” she says.

Goldstein’s son Martin told The AJN this week that through her story her legacy, and those of so many survivors, should live on.

Community leaders paid tribute to Goldstein, the voice of survivors for many in the community.

Sydney Jewish Museum CEO Norman Seligman said Lena had been part of the museum’s family since its inception.

“She was committed and passionate about sharing Holocaust history and her own experiences, and was an active volunteer, telling her story to adult and student visitors since 2007.

“Lena had an amazing sense of humour, which no doubt helped her to cope during those very dark days.”

He said her legacy will live on in her family, friends and at the Museum. “We are honoured to have known such a remarkable and vibrant woman, and to call her a member of our extended family.”

“She maintained a really sharp mind, was interested in everything that was going on around her in the world and was completely devoted to ensuring that the younger generation understand the evils of the past and the need to prevent repetition of them,” Seifert said.

“Someone loved by many, respected by everyone, highly valued and an honour to have known.”

New South Wales Jewish Board of Deputies president Lesli Berger said Goldstein was an inspiration to the Jewish community and everyone who cares about human rights.

“A glance at her experiences in the Holocaust and how she fought for others in the face of horrendous adversity stands as testament to her courage and spirit,” Berger said.

“The spontaneous applause which she received when, at the age of 100, she lit a candle at our recent Shoah commemoration spoke volumes as to the esteem and affection in which she was held.”