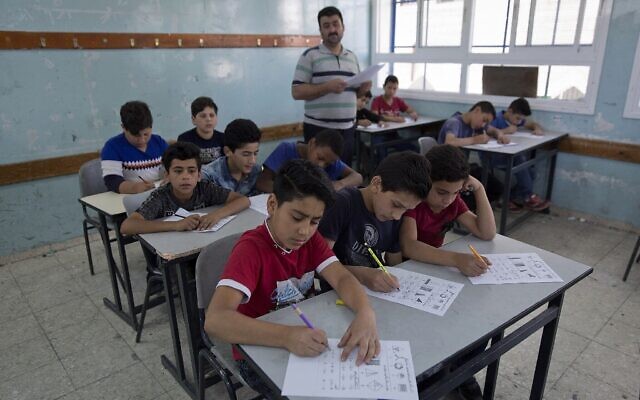 THE head of a Middle East monitoring group has declared governments “can no longer trust” the United Nations’ Palestinian refugee agency after disturbing examples of bias and incitement were found in teaching materials it authored.

Marcus Sheff, CEO of the Institute for Monitoring Peace and Cultural Tolerance in School Education (IMPACT-se), has taken aim at UNRWA (the United Nations Relief and Works Agency for Palestine Refugees in the Near East) for producing the materials used by school students in Gaza and the West Bank. UNRWA has previously distributed Palestinian Authority-produced material.

“After years of hearing UNRWA’s claims that it does not teach hate and has safeguards in place, we have for the first time taken a peek behind the curtain and what we see is shocking,” Sheff told The AJN.

“A UN organisation has created radical teaching material that promotes violence, hate and blood libels [and] has systematically distributed it to over 300,000 schoolchildren.”

IMPACT-se’s report into the material labels it “rife with problematic content that contradicts stated UN values”.

Examples include the reproduction of texts and phrases from PA textbooks that glorify violence, grammar exercises that use the language of jihad and sacrifice, and passages that celebrate terrorists such as Dalal Mughrabi, a perpetrator of the 1978 Coastal Road Massacre of 38 Israeli civilians.

Israel and Zionism are referenced entirely in a negative context, while Israel is falsely accused of causing the 1969 Al-Aqsa Mosque fire and deliberately dumping radioactive and toxic waste in the West Bank.

Sheff said the consequences will be “generation after generation of radicalised Palestinian children”.

“Instead of offering hope, a peace education and a future of happiness and success, UNRWA is collaborating with the Palestinian Authority to ensure these children are taught about sacrifice, jihad and martyrdom,” he said.

A spokesperson said, “DFAT has reiterated to UNRWA the importance it places on non-discrimination, equality and neutrality in the education programs that UNRWA supports.”

Australia has this year reduced its funding to UNRWA from $20 million to $10 million per year.

Executive Council of Australian Jewry co-CEO Peter Wertheim said it is time “for Australia to look for new, more constructive partners through which to channel its assistance”.

By feeding the hearts and minds of young Palestinians “with the poison of racism and violent extremism” he said UNRWA was in “direct violation” of educational standards prescribed in UNESCO’s Declaration of Principles on Tolerance and its Integrated Framework for Action on Education for Peace, Human Rights and Democracy.

Australia/Israel & Jewish Affairs Council executive director Colin Rubenstein said it has long been clear that UNRWA “has become a serious barrier to Israeli–Palestinian peace in numerous ways, of which the textbook issue is just one”.

He called on the government to review “whether its commitment to UNRWA is the best way to further our national interest”.

Zionist Federation of Australia president Jeremy Leibler said he was not surprised by the revelations.

“UNRWA teachers have been Hamas members and supporters of violence against Israeli civilians. UNRWA schools have been used as staging grounds and storage facilities for terrorists,” he said.

“All Australian funding for UNRWA should be re-purposed to a reputable organisation until UNRWA can finally prove itself to be a catalyst for Israeli–Palestinian peace, instead of a hindrance.”