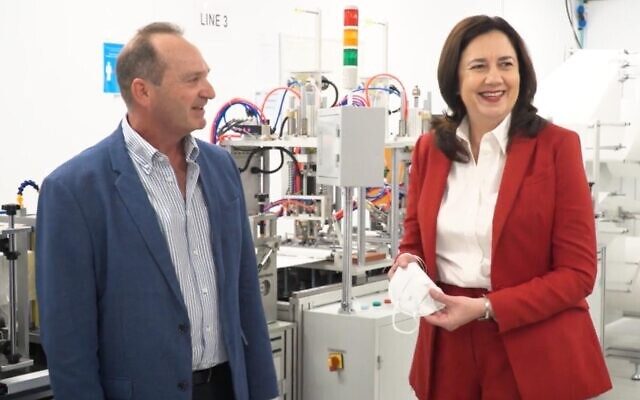 WHEN the COVID pandemic struck in early 2020, materials and machinery used to make personal protective equipment (PPE) became such hot property that Jewish community member and director of Betts Group, Andrew Breckler, went to remarkable lengths to get his hands on them.

Top producers of PPE such as China, which also produces the machinery needed to manufacture the equipment, quickly realised they were sitting on gold and ramped up prices. Breckler said one essential material became five times the amount it had been pre-pandemic.

“We ended up having to take extraordinary measures,” recalled the Melbourne-based shoe magnate. International agents were sent into factories in China to test their product for quality assurance and to guard the materials until they were shipped.

“You would literally have people stay with it to make sure it didn’t get substituted or stolen,” said Breckler, adding that he was lucky to have trusted people on the ground in China who packed their sleeping bags and toothbrushes and protected the materials for days.

“The trick was to make sure the people who were sleeping with your product were being paid more than the bloke that wants to steal it.”

While Breckler admitted he feared the unknown when he took the leap into manufacturing PPE, he said he understood the risks, channeling his experience from his 35-year career in shoe manufacturing.

Breckler is the great-grandson of Yoel Breckler, a Russian immigrant and his wife Fanny Masel, who together founded a boot repair store in Western Australia in 1892. Almost 130 years later, the business now known as Betts has become the largest privately-owned footwear group in Australia.

Reaching out to the network he had built over the years, Breckler and the AMM team built their PPE factory in Brisbane, with help from Jewish architect Cavin Chait of Zone Designs.

Breckler has recruited 30 Australians who lost their jobs during the pandemic and is now providing medical grade face masks to a range of Australian industries and numerous facilities across the Pacific islands. Last month, AMM also sent 50,000 respirators to the UAE to be used by Australian defence personnel in Afghanistan during the evacuation.

The Armadale local said his central aim is to boost manufacturing down under, to raise the country’s “sovereign capability for the future”.

“Anything with a medical flavour to it, we want to bring it back to Australia,” said Breckler.