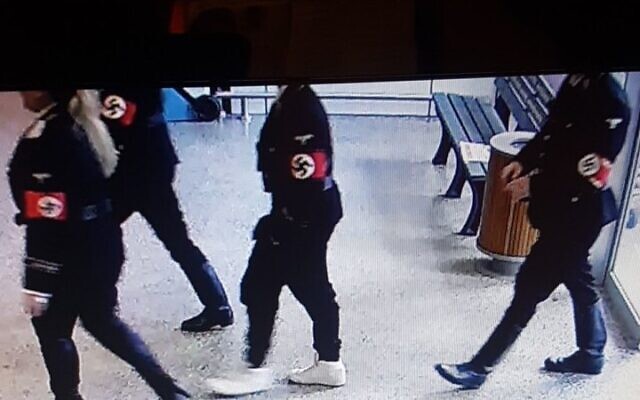 JEWISH leaders have warned of a growing “disconnect” with the Holocaust after a group of shoppers at a Victorian supermarket were seen entering the store dressed in Nazi uniforms.

The incident occurred at a Coles store in the Victorian town of Woodend late last month when two men and two women, all reportedly aged about 20, browsed the supermarket wearing uniforms that included swastika armbands and the imperial eagle.

Witness Craig MacKenzie told The Sunday Age he believed the group was heading to a party, but that shoppers, many of whom were elderly, were visibly intimidated by the display.

“I said to them that they were being highly disrespectful and had no idea what their uniforms meant,” MacKenzie said.

“The blokes told me that it was ‘only a joke’ and to f— off. I persisted, saying that there could be people here who went through World War II and the Holocaust. They laughed it off and told me to f— off again.”

Executive Council of Australian Jewry co-CEO Peter Wertheim said it was “truly bizarre” that some people are “so ignorant of history, or so oblivious to the gruesome butchery of the Nazi genocide, that they apparently think that walking around in SS uniforms with swastika armbands is just a bit of harmless fun”.

“Perhaps a visit to the Auschwitz extermination camp or the crematorium at Theresienstadt would jolt them back into reality,” Wertheim said in a statement.

Jewish Community Council of Victoria president Jennifer Huppert said there was a “lack of understanding” about the impact of Nazi memorabilia, costumes and symbols, and a growing “disconnect” with the Holocaust.

Describing the incident as “very disturbing and distressing”, Huppert said, “It’s not a matter just for the Jewish community, Australians fought in that war for freedom against Nazis.

“These people probably don’t even know their own grandparents fought in a war against the people in those uniforms.”

Stating that this incident is “beyond revolting”, Anti-Defamation Commission chairman Dvir Abramovich said, “Allowing the public showcasing of the swastika or other Third Reich paraphernalia violates our rights to feel safe, and I repeat my call for the state and federal governments to ban the public displays of the swastika or other Nazi insignia.”