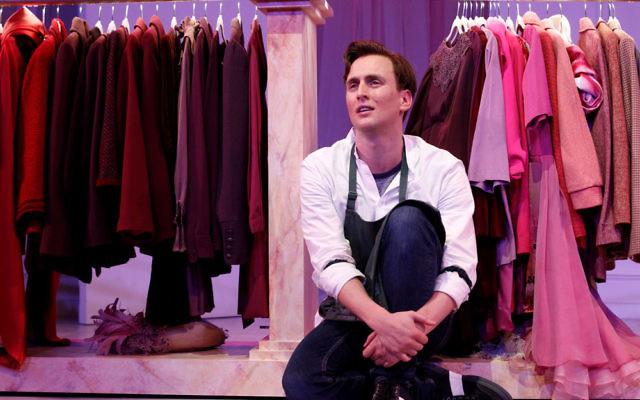 FOR theatre director Gary Abrahams, it has been a busy few months at the helm of major productions including the Australian premiere of Bad Jews in September and the Melbourne Theatre Company’s latest play, Buyer and Cellar, currently being staged at the Fairfax theatre.

Buyer and Cellar is a comedy by Brooklyn-born writer Jonathan Tolins about an out-of-work actor who takes a job as a shop assistant in Malibu which turns out to be the basement of superstar singer Barbra Streisand’s mansion.

Ash Flanders plays the role of shop assistant Alex – along with playing half-a-dozen other characters – in the solo production at the Fairfax theatre that marks his MTC main season debut.

“This is a very funny show based on such a silly, preposterous premise,” says Abrahams. “The amazing part is that some is true – Streisand has a basement shopping mall and that becomes the springboard for the rest of the play.”

A cult hit in New York and London, Buyer and Cellar looks at the price of fame, friendship and the oddest of odd jobs.

“A one-man show has its challenges – one person on stage is very different to four or five performers, and it is a big challenge for the actor,” says Abrahams.

“Ash is a wonderful performer and is so funny – he reminds me of a young Steve Martin or Robin Williams.”

Abrahams says at this time of the year theatre audiences are looking for a show that is light and entertaining, and Buyer and Cellar fits the bill.

“Whether you are a fan of Barbra Streisand or not, you will still get a lot out of this production.”

Abrahams, 36, was born in South Africa and grew up in Johannesburg. He moved to Melbourne to study at the Victorian College of the Arts (VCA) and, after graduating in 2009, continued his acting career in London for several years.

He returned to Melbourne to complete his masters degree of theatre practice at the VCA and established independent theatre company Dirty Pretty Theatre. He is currently resident dramaturge at Red Stitch Actors Theatre.

Abrahams says he was pleased that Bad Jews, by New York Jewish writer Joshua Harmon, enjoyed audience and critical success at the Alex Theatre, with the season extended.

“Inevitably with a play like that you are going to put a few noses out of joint, but for the most part the audience loved it and found it very funny, and loved that issues were being aired,” he says.

“I found it interesting to sit with the audience each night and have a full house roaring with laughter. And it was not just a Jewish audience that came to see it, but also a much wider audience.”

Abrahams says there are plans for Bad Jews to have a return Melbourne season and an interstate tour.

Buyer and Cellar is at the Fairfax, Arts Centre Melbourne until December 12. Bookings: www.mtc.com.au.