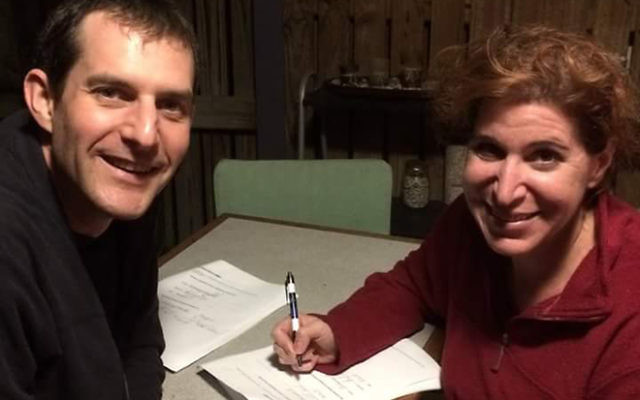 BKS president Matthew Goldman and BPJC (Beit Or) president Hila Jacobi sign a memorandum of understanding leading to the merger between the two congregations.

The new congregation will be known as Beit Or v’Shalom, and will be based at the location of the original Progressive shule (Temple Shalom) in Koolatah Street, Carina (previously Camp Hill).

Queensland Jewish Board of Deputies president Jason Steinberg said he was elated at the news. “The efforts shown by the two congregations and their leadership to merge is a great outcome for our relatively small Jewish community in Brisbane. The new merged Progressive congregation demonstrates the importance of having a harmonious community with shared values.”

Beit Or president Hila Jacobi, who will serve as president of the reunified congregation until a new board is elected around the middle of next year, said, “The reunification has come about after years of hard work. The will of the two congregations is there and the time is right. We look forward to a strong, inclusive and growing centre of Progressive Jewish learning and worship.”

BKS president Matt Goldman, who recently made aliyah, and who with Jacobi was instrumental in bringing about the reunification, said the merger would create “a strong Progressive community centre in Brisbane, which will further strengthen the wider Brisbane Jewish community. We can now look forward to a lively, united and growing congregation.”

The split came about nearly 10 years ago because of ideological differences between two groups in the original BKS community, when some members of the board took a more Conservative direction, as well as other leadership issues.

Union for Progressive Judaism (UPJ) president Roger Mendelson described the outcome as “wonderful news for the Jewish community in Brisbane, including the Orthodox, as it will strengthen the whole community”.

He said the UPJ “especially acknowledges the wisdom and drive shown by both boards and their presidents”.