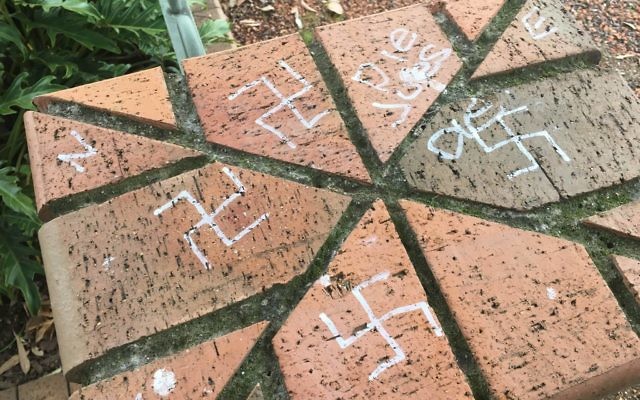 POLICE are investigating an incident where a number of World War II gravestones were defaced with swastikas at Nowra, on the NSW South Coast, late last month.

Swastikas were daubed onto the backs of nine marble headstones in the Nowra War Cemetery, while more were drawn on a brick entrance pillar along with the words “die Jues [sic] die”.

NSW Jewish Board of Deputies CEO Vic Alhadeff condemned the graffiti as “offensive to all Australians, particularly those who fought the Nazis, those who survived the Holocaust and members of the Jewish community”.

“It is very concerning that there is a handful of bigots out there who feel the need to engage in such despicable conduct,” Alhadeff said.

NSW Labor frontbencher and NSW Parliamentary Friends of Israel deputy chair Walt Secord described the desecration of the graves as “sickening”, and an “affront to those who survived the Shoah and the brave Australians who fought fascism during World War II”.

“This attack seems to have been carried out by more than simple vandals and was a clearly calculated, racially motivated hate crime aimed to cause maximum offence,” Secord said.

He noted that this incident followed another attack at Bondi Beach last month, in which 15 swastikas were drawn on the footpath, bus shelter, poles, benches and electrical boxes on Campbell Parade.

“I am appalled by these sickening attacks and they have no place in our society,” Secord said, adding that those who carried out the vandalism are “gutless cowards”.

“We must be vigilant and speak out against these sorts of sickening attacks.”

Deploring this “disturbing act of bigotry that insults the dead and threatens the living”, B’nai B’rith Anti-Defamation Commission chairman Dvir Abramovich said, “We can imagine the hurt and revulsion that this crime has caused to the families of those buried in the cemetery who fought valiantly to defeat Hitler’s demonic regime.”

He said this desecration sends a “clear message” that there is “still much work to do in the fight against racism, anti-Semitism and prejudice”.

“These types of cowardly attacks generate fear and a feeling of vulnerability, and at such times, we urge all Australians to speak out and to declare that such hate-filled actions are unacceptable.

“It is also our hope that the police will identify those responsible and that they face the full extent of the law.”

A NSW Police spokesperson told  The AJN this week no persons have been charged, and inquiries into the incident are continuing.