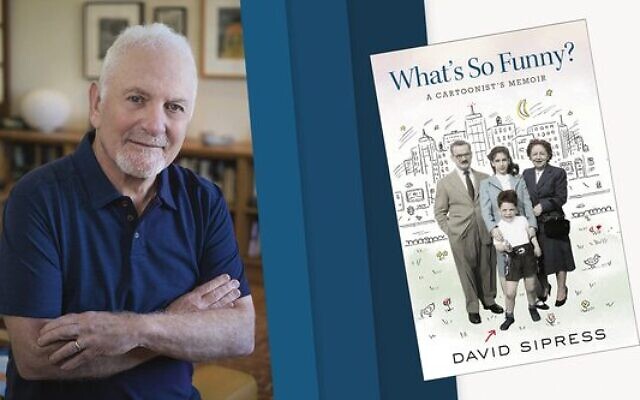 David Sipress did not sell his first cartoon to The New Yorker until 1997, when he was 50. He wasn’t a struggling artist – his work had long appeared in the Boston Phoenix, Playboy and the Washington Post, and he had some success as a sculptor. But The New Yorker represented the career pinnacle he wanted to share with his father – especially a Jewish father who immigrated from Ukraine “with a fifth-grade education” and ran a jewellery store, and who never regarded art as a viable career.

Nat Sipress lived long enough to hear the good news from David, but not long enough to see the cartoon in print – a twist worthy of a David Sipress cartoon.

The cartoonist’s new memoir, What’s So Funny? explores the fraught relationship between demanding parents and a son whose dreams didn’t match up with theirs.

Along the way, Sipress discusses his Upper West Side Reform Jewish upbringing in the 1950s; his way of “obsessing” about his family’s secrets; and his determination to draw inspiration from “what I’m experiencing day-to-day … what makes me happy, what scares me, what makes me angry”.

“As I say in my book, the border between my life and my work is flimsy at best,” he said.