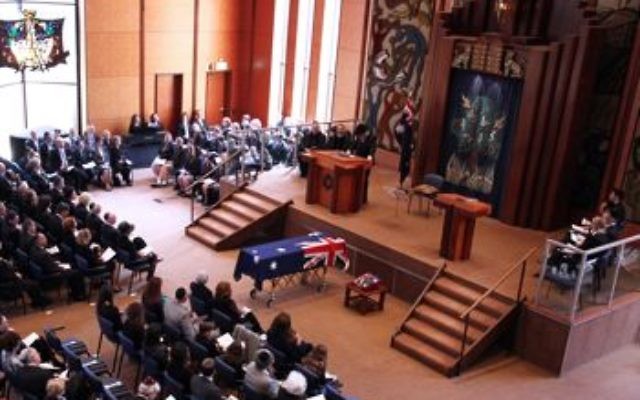 A GALAXY of Australians from all walks of life gathered at Temple Beth Israel (TBI) on Tuesday at a state funeral to farewell their friend and mentor Sir Zelman Cowen.
The former governor-general, who also served as professor of public law at the University of Melbourne, vice-chancellor of the universities of New England and Queensland and provost of Oriel College, Oxford – among countless other public roles – died last Thursday, aged 92.
Headed by Governor-General Quentin Bryce, Prime Minister Julia Gillard and Opposition Leader Tony Abbott, mourners included former prime ministers Malcolm Fraser, who appointed Sir Zelman as governor-general in 1977, flanked by Bob Hawke, who sat with John Howard, and Paul Keating a few rows behind.
The 1200-strong congregation also boasted Victorian Premier Ted Baillieu, State ALP leader Daniel Andrews, former premiers Steve Bracks, John Brumby and John Cain, Labor’s elder statesman Barry Jones, Chief Justice Robert French, Lord Mayor Robert Doyle and Melbourne Ports MP Michael Danby.
There were three former governors-general in attendance – Sir Ninian Stephen, Sir William Deane and Dr Peter Hollingworth – as well as NSW Governor Marie Bashir, South Australian Governor Rear Admiral Kevin Scarce and Governor of Victoria Alex Chernov.
Executive Council of Australian Jewry president Dr Danny Lamm and Jewish Community Council of Victoria president Nina Bassat headed a comprehensive slate of Jewish communal figures paying their respects, flanked by a rainbow of clergy from other faiths.
The service commenced at 10.40am as a hush descended among the mourners when Sir Zelman’s coffin, draped in the Australian flag, was brought into the synagogue and placed next to a chair on which his military and civic decorations were displayed. His wife Lady Anna Cowen, children, grandchildren, great-grandchildren, and other family members, took their seats.
It was the funeral service Sir Zelman had meticulously planned in his twilight years, right down to the music – Mozart’s Adagio, Bach’s Sarabande and Vidor’s Toccata – and personally selected friends who eulogised him.
At 11am, Rabbi Fred Morgan, TBI’s senior rabbi, introduced The King David School Choir, which offered both stanzas of Advance Australia Fair, ushering in a solemn, heartfelt service that spanned more than two hours.
Tributes flowed, interspersed with Hebrew prayers, capped by “El Malei Rachamim”.
Paying tribute to his father, Rabbi Dr Shimon Cowen spoke of his spirituality, adding “Dad lived decently, not because of the sanctions of heaven and hell, but because it was the right way.”
In his eulogy, emeritus Rabbi Dr John Levi spoke about the 66-year marriage of Sir Zelman to Lady Anna, and recalled him saying, “I look at her in wonder and my eyes fill with tears.”
Reflecting on Sir Zelman’s career, Rabbi Levi added, “There was no frontier between the public and the private man. He had the same values in his private life as in his public life. Could that have been the source of his greatness?”
In his tribute, longtime friend and Federal MP Josh Frydenberg said Sir Zelman’s “intellectual brilliance, profound decency and firm moral compass were equally matched by a deep sense of his own identity”.
Professor Don Markwell, warden of Rhodes House at Oxford, hailed
Sir Zelman, in his role as governor-general, “a wholly nonpartisan constitutional scholar and attractive public figure who, in thought and action, had grappled more profoundly than perhaps anyone else in this country with the issues of division, consensus, communication, and healing”.
Close friend Steven Skala, a director of the Australian Broadcasting Corporation, spoke of the private Sir Zelman – husband, father and grandfather – whose favourite holiday spot, even during his vice-regal years, was a holiday cottage on the Sunshine Coast, where he joined family members in “reading, cooking, swimming”.
Sir Zelman was patron of the St Kilda Football Club, and when Skala was talking to him about his love of the Saints after their misfortunes last year, Sir Zelman confided that, although it was Yom Kippur, he had quietly gone to the football to witness St Kilda’s only premiership triumph in 1966. “I asked him, ‘Was it worth it?’, and he replied, ‘Too soon to tell.’ I think he now knows the answer”.
Skala said Sir Zelman, reflecting on his life, had told him: “The small boy could not dream of all this. I am deeply grateful.”
Peter Kohn

For full coverage and tributes, see this week’s AJN.