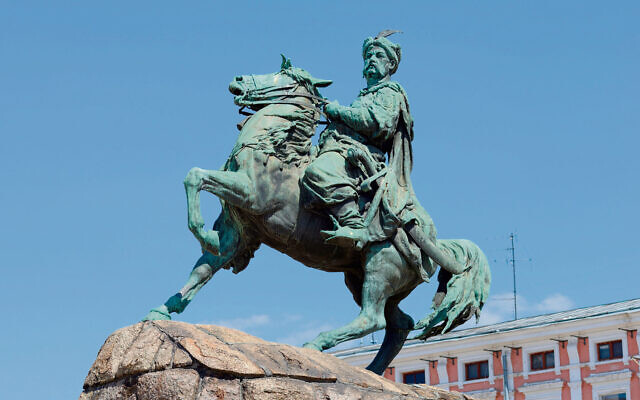 For quite some months now events in the Ukraine have been of significant concern. The western world – and our worldwide Jewish brethren – are appalled at the continuing destruction and loss of life that characterises this conflict. Even more so than in Australia, events in Ukraine are constantly highlighted in Israeli media and are at the forefront of the national consciousness. Yet some have hesitated to fully empathise with the Ukrainian people because, while the current generation my not be at fault, Jewish history in Ukraine, even as it was the cradle of the Chassidic movement, has involved much Jewish suffering, whether as a result of internal events or invasions from outside the country.

For three centuries, Sivan 20 (which falls this coming Sunday) was a fast day in much of Eastern Europe, until the events that brought it about were overtaken by the even greater tragedy of the Holocaust itself. Reference to older siddurim, such as that of Reb Yaakov Emden, reveals that it was a fast day replete with its own liturgy, including selichot specially compiled for the purpose.

In the centre of the city of Kyiv in Ukraine there was even erected a statue of Bogdan Chmielnicki astride his horse. The Cossack and peasant uprising against Polish rule in the Ukraine led by Chmielnicki turned into a Ukrainian war of liberation from Poland. He became a national hero despite murderous excesses which resulted in the destruction of hundreds of Jewish communities. The area of what we now know as Ukraine had been under the suzerainty of an entity termed the Polish–Lithuanian Commonwealth. That uprising resulted in the creation of an independent Ukrainian Cossack state. In 1654, Chmielnicki concluded the Treaty of Pereyaslav, thus placing central Ukraine under Russian control.

Turning back to 1648, the first large-scale massacre took place in Nemirov (subsequently associated with Rabbi Nachman of Breslov), where the Jews refused to convert to Christianity. As recorded by Rabbi Shabbetai Meir Hacohen (the famous commentator on the Shulchan Aruch known as the Shach), Sivan 20, 1648 saw 6000 Jews massacred, their synagogue destroyed, and Torah scrolls desecrated.

The two years of similar havoc that ensued are known as Gezerot Tach veTat – the decrees of 408/409, the Hebrew equivalent dates of the years 1648 and 1649. The bloody pogroms wiped out around 100,000 Jews in Eastern Europe, about one third of Europe’s Jewish population at the time and destroyed many centres of Jewish learning and communal life. In 1650, the fast of Sivan 20, marking the date of outbreak of the violence, was instituted by the Va’ad Arba Aratzot, the Council of the Four Lands, that served as the governing body of what was then the contemporary Eastern European world.

While Jews subsequently returned to many of the cities where communities had been destroyed, the impact of those events would long reverberate on Jewish life in Europe. For most of the Jews of Europe this was a propitious moment for the messiah to deliver salvation. The destruction that had occurred made plausible the fantasies of the false messiah Shabbetai Zvi. The readiness of so many Jews to believe his messianic claims may largely be explained by the desperate state of European Jewry in the mid-17th century.

More positively, however, two generations later the Chassidic movement had its origins in the way the Ba’al Shem Tov would concern himself with the many simple and uneducated Jews scattered across the countryside – many of whom were in the situation in which he found them as a result of themselves or their parents having been orphaned and forced to survive in isolation during this terrible period.

But those events aside, Sivan has also more recently been a month of tragedy. When I was younger we all vaguely knew that the Hungarians in our community (most of whom, sadly, have now passed on) had yahrzeit in or around Sivan. In an era when such matters were not widely spoken about, we may not have understood why this was so, but it was a fact that greeted us in shule through Hungarians saying kaddish and leading services from the amud as is customary on a personal yahrzeit. Why?

For following the March 1944 Nazi invasion of Hungary, which had as a key aim the destruction of the last remaining bastion of Jewry in Europe, May 15 to July 9, 1944 (Iyar 22 to Tammuz 17) was the short eight-week period in which some 437,000 Jews were transported to their fate.

As evidenced by press reports then even to be found in our own Australian Jewish News, all this tragedy took place under the watchful eyes of the world – yet saving the lives of Jews was not the priority of the time, even though by then the fate of Polish Jewry similarly transported in 1942/3 was already well documented. However, circumstances so late in the war were such that although almost all the Jews of Hungary outside Budapest were transported under the direction of Eichmann, a substantial portion of those in Budapest survived despite the ravages of the Arrow Cross who took power in October 1944. Thus, a depleted Budapest Jewish community was able to reconstitute itself as the war ended.

Interestingly, in 1946 the Budapest Orthodox rabbinate reprinted the selichot service of Sivan 20 in an attempt to reintroduce that fast day but with its emphasis on the events then so fresh in the minds of Hungarian survivors, but the concept did not catch on. Perhaps the war-weary survivors understandably sought only to look forward and not backwards – the last thing needed by those who had survived so much hunger and deprivation was another fast day.