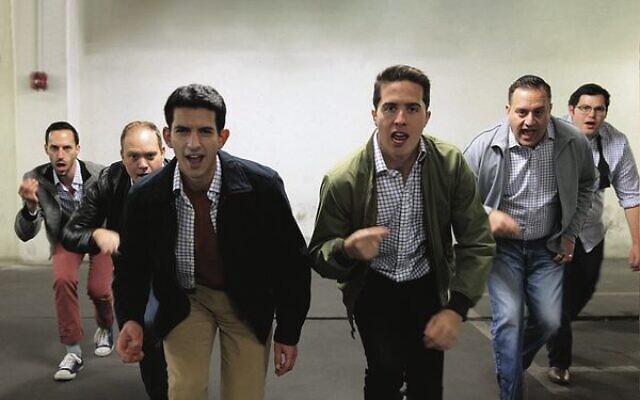 A screenshot from West Side Chanukah Story.

IT just doesn’t feel like Yom Tov without a Six13 parody song.

With an opening shot featuring the George Washington Bridge, its tower and the surrounding buildings being transformed into a flickering menorah, the song takes some of the best-known tunes from the famous Broadway musical and works them into its toe-tapping festive goodness.

Maria becomes “Menorah”, Tonight becomes “Eight Nights”, America becomes “On Chanukah” with lyrics including “Chocolate money on Chanukah/Latkes are crunchy on Chanukah/Presents from Bubbe on Chanukah/I want a puppy for Chanukah!”

Original Six13 member and chief arranger Mike Boxer told the New York Jewish Week that the forthcoming cinematic reboot of West Side Story, directed and co-produced by Steven Spielberg, was an inspiration for doing the song.

“When I heard that the movie was coming out, I was like, when? We are doing this, for sure,” he said.

“West Side Story is one of the greatest pieces of art ever crafted.”