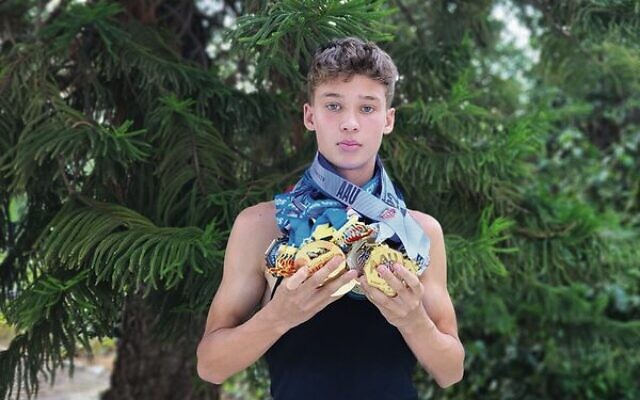 JJ Harel with all his AAU medals. Photo: Lucy Harel, via JTA

Having just turned 14, Los Angeles boy JJ (Joshua Jayden) Harel – an elite junior high jumper – is on track to become an Olympian in 2028 when his city hosts the Games.

But his first decision will be whether to march into the Olympic stadium under the American, Australian or Israeli flag.

Harel won 27 international junior athletics medals in the last 12 months as a 13-year-old athlete, including at the Maccabiah Games in Israel in July, where he placed first in high jump, and second in triple jump, in the U18 boys’ category.

Then there’s the record-breaking high jump that earned him a profile in the Los Angeles Times last week.

Last month, Harel participated in the American Athletic Union (AAU) Junior Olympics, where he won three gold medals, and cleared 195cm in the high jump – breaking the record for the 14-and-under age group that had stood for 42 years.

He won gold in the triple jump and javelin as well.

After meeting in Israel, his parents based themselves in Sydney for a decade, where all their three children were born, before relocating as a family for two years to Israel, and finally Los Angeles in 2013.

Harel is now a freshman at the Catholic Chaminade High School, which has a highly-regarded athletics program. He also plays basketball for the school, and is a gifted student academically too, as the only freshman at his school doing pre-calculus mathematics.

His father consulted with school authorities beforehand, to make certain that his son would not be compelled to participate in Catholic morning services.

According to a report by Eric Sondheimer in the Los Angeles Times, most of Harel’s high jumping success has come through his own determination and teaching.

He learned the Fosbury flop technique watching videos, and he set his record going off his right foot, even though previously he went off his left.

He switched because he has a big bump on his left knee from a growth spurt.

His basketball coach Bryan Cantwell said Harel “works super hard … if he’s not doing well, he gets upset, which is great [because] he cares about being good”.

As for the intriguing question as to which of the three nations Harel would, or should, choose to represent at the 2028 Olympics, should he end up qualifying for it, his father had this commonsense answer:

First, he has to develop into a world-class high jumper.

There are signs Harel was born to make this journey, as he doesn’t get nervous or overwhelmed in pressure situations.

He started clapping to help pump up the crowd in North Carolina before setting the new record.

“I like the adrenaline rush,” he said. “It gives me an extra boost.”