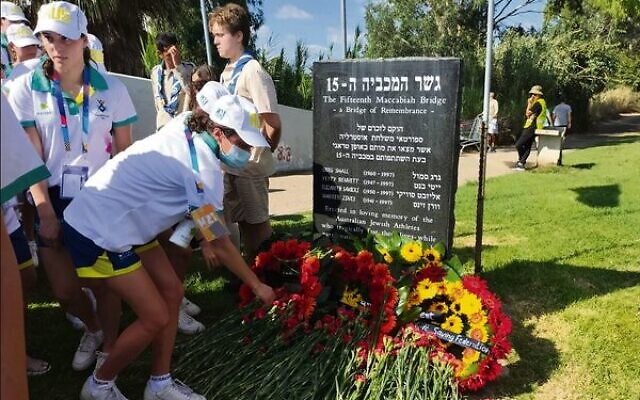 Left: Australian team members laying wreaths and flowers at the 1997 Maccabiah Games bridge collapse memorial stone in Ramat Gan on July 11.Right: The audience at the bridge memorial ceremony beside the Yarkon River.

WEARING team polo shirts marked 1997 in tribute, and with roses in hand, the entire Australian Maccabiah delegation marched as one in quiet reflection on Monday afternoon (Israel time) across the Yarkon River.

Laying wreaths next to a memorial stone, they walked past the stadium in Ramat Gan that hosted the 1997 opening ceremony, and observed a minute’s silence at a moving 25th anniversary memorial service.

Maccabi Australia president Jeff Sher – noting many younger athletes would not yet have been born – urged them to “close your eyes and try to imagine the feelings of hope, excitement and anticipation that the Australian team had on the night of July 14, 1997 … just like you”.

“Try to imagine if you can the tragedy of what unfolded – when the bridge that would give them the rite of passage to the time of their lives, collapsed.

“Dreams cut short, and lives lost, will be the enduring memory of that Maccabiah, and so we gather here to remember all of those who are impacted, injured, scarred, and most importantly, to pay our respects and condolences to the families of Greg, Elizabeth, Warren and Yetty.” 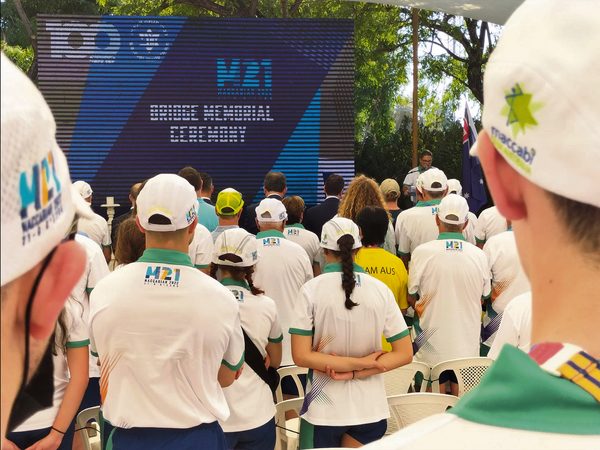 The audience at the bridge memorial ceremony beside the Yarkon River.

MWU vice-president Tom Goldman – who was Maccabi Australia president in 1997 – recalled telling the devastated Australian team 25 years ago about the meaning behind Israel’s national anthem, Hatikvah, symbolising hope. “The team, united in grief, was forced to confront the heartache and sorrow that enveloped us,” he said.

“Our strength, determination and spirit gave us the courage to remain in Israel and participate in the Games, and that Maccabi spirit brought us home 60 medals from those Games – the best results achieved by an Australian team until then, despite such adverse circumstances.”

Head of the Australian delegation, Barry Smorgon, said, “This has correctly been a solemn occasion, as we pay our respect to the past history of the bridge disaster, which will never be forgotten by the Maccabi family.

“It is, however, appropriate to look forward with excitement, as we cast our thoughts to the present, and what lies ahead over the next 12 days.”

Australia’s ambassador to Israel, Paul Griffiths added, “The 21st Games delegation of more than 530 athletes is an incredible celebration of the Australia-Israel relationship, and of Australia’s vibrant Jewish community.

“But even 25 years later, it is impossible not to feel heartbreak over the tragic and avoidable deaths of Greg Small, Yetty Bennett, Elizabeth Sawicki and Warren Zines.

“While the pain will never disappear, it is our duty to remember, and walking across the bridge together today was a humbling experience, and a testament to the resilience in the Aussie spirit.” 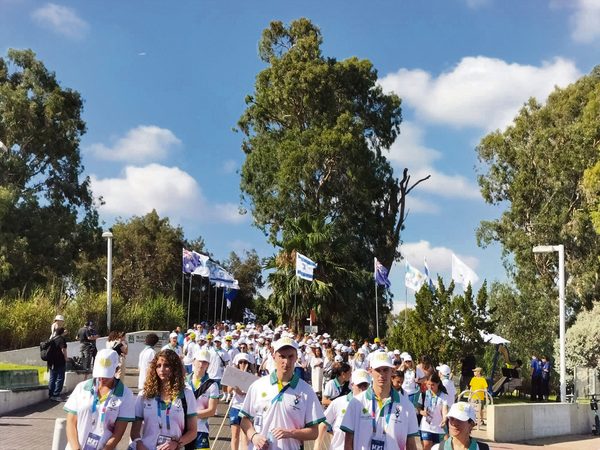 The Australian Maccabiah delegation, walking as one on a bridge across the Yarkon River last Monday.

The ceremony also featured pre-recorded video messages from 1997 team members, including Josh Frydenberg, Michael Klinger, Josh Goldstat, Amanda Montag and Jonathan Goldberg – who was saved from drowning in the river by Israeli Baruch Ben Yigal, who through his volunteering efforts at every Maccabiah Games since, has become an honorary Australian team member.