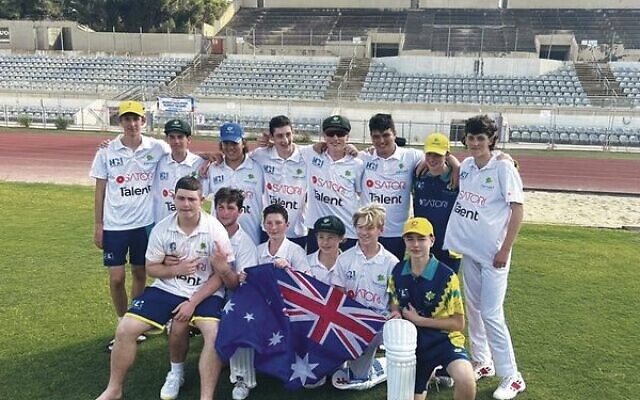 A YOUNG, but determined Australian U18 boys’ cricket team won silver at the Maccabiah Games.

Apart from losses to a strong South African side, in the first match and the final, the Aussie boys were up to the task.

They had a gutsy two-run win over Great Britain, followed by a massive 318-run over Israel, in which Jordan Segal scored an astonishing 120 not out off just 26 balls, Max Nathan was unbeaten on 78, and Josh Finkelstein made a handy 67.

That got them into a semi against Great Britain, where they reached 5/217 before bowling out their opponents for 147.

Coach Wayne Myers said, “Winning silver was a great result for this young team, with four guys aged 14, and seven players under 16.

“Jordan’s unbeaten innings of 120 was one of the best I’ve seen, and he made another half century, as did Marley Whitcombe, while bowler Nadav Lowinger took 6-17 in one match, and Matt Finkelstein was named Most Improved Player.

“The boys’ success was a real team effort.”

Team manager Karen Segal said, “As a group of eight Sydney and six Melbourne boys, they bonded beautifully, and have become good friends.”

They began brightly with a 51-run upset victory over South Africa on the back of brilliant bowling by Asher Barolsky (4/21) and Aaron Ostilly (three wickets), but then lost to Israel by seven wickets, and to Great Britain by 32 runs, before soundly beating India.

In the bronze decider against Israel, Aussie captain Jono Weinstock scored 101, and Vincent Page 130 not out, helping to set a target of 290.