Lew’s doctorate is in recognition of his philanthropic record in supporting important causes including Jewish continuity, education, healthcare, sports, arts and culture, as well as his establishment of the Solomon Lew Centre for Consumer Behaviour at Tel Aviv University.

Lew received his award at a ceremony at the university on May 13. 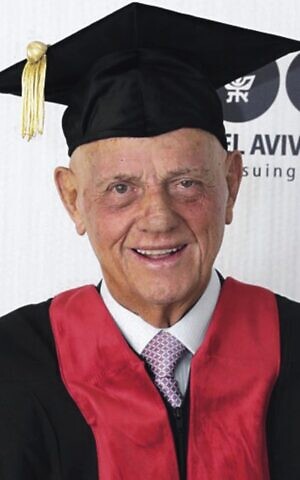 “I am proud to have had the opportunity to make my own success in life. I am proud of my family and of my longstanding friendships. And I am grateful to be a part of a community where I have been able to make a meaningful contribution to education, both locally and abroad,” he told The AJN.

He added, “I’m proud to have supported Mount Scopus College where I was chair for 27 years. It’s one of the largest Jewish day schools in the southern hemisphere with 1600 children.

“And I’m grateful to Jack Lanzer for introducing me to Tel Aviv University where we have established a Centre for Consumer Behaviour within the business school.

“Finally, I would like to say that I remain inspired by the success of Israel. It’s astounding to appreciate what’s been achieved in such a short period of time and I draw strength from that in my business and community pursuits.”

“After 23 years of involvement with AFTAU Victoria, Sol has received an honorary doctorate, one of the highest honours from TAU for his steadfast support. We are very proud!” she said.