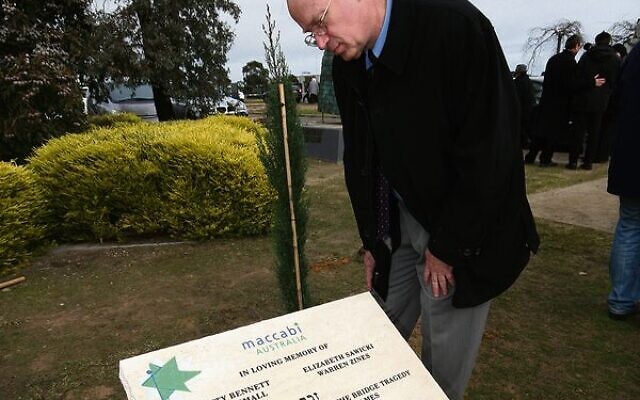 WHEN Ian Wilcock was posted to Israel as a junior officer with what is now Australia’s Department of Foreign Affairs and Trade (DFAT), he thought the 1973 Yom Kippur War would be the most momentous chapter of Israel’s history he would ever see at close quarters.

But that all changed decades later, when, as Australia’s ambassador to Israel, he was on the ground on July 14, 1997, when a footbridge carrying athletes collapsed into the polluted Yarkon River during the opening ceremony of the Maccabiah Games, causing four Australian fatalities and many injuries.

Contacted by The AJN this week, Wilcock, 75, now retired from public service, recalled the fateful day 25 years ago. “I’d been out and around a lot for various reasons and I was feeling pretty weary when I got to the opening ceremony. I remember thinking, ‘Good, I can watch the parade and fireworks and then I can go home.’ Well, I didn’t get home till the break of day.

“Someone came and whispered to me there was trouble … ‘come and have a look’. I did, and they were still fishing people out of the Yarkon River,” he said.

“We mobilised the embassy staff to track them, and they worked with the Australian team staff who were terrific. We tracked them down and provided the sort of consular reporting we needed to do, and for that purpose we used not only [embassy] staff members but their family members, so we had enough people to work on it. I think that was pretty unusual.”

In the hours after, tracking and tracing – and reporting back to Canberra, where the new day was beginning – became a huge part of the embassy’s work, said Wilcock.

“I can’t speak too highly of the [Maccabi Australia] team and management, they were just terrific to work with … They were marvellous at self-organisation, morale building, contact making.”

In the following days, Wilcock coordinated the embassy’s effort to keep tabs on the number of victims, and the condition of survivors.

“[The team] had decided in difficult conditions to go on competing. We had a very emotional meeting, it was one of the most dramatic meetings I’d ever been in – the sorrow, the grief, the uncertainty. But they did decide to compete, and I decided I needed to be out and around as much as possible for morale reasons.”

He said in later years, DFAT came to regard the Maccabiah emergency as a model for consular corps dealing with unexpected crises. Wilcock served as Australia’s Israel ambassador from 1997 to 1999. In 2000, he was back in Canberra and was put in charge of consular matters with an emphasis on crisis management, due to his experience with the Israeli disaster.