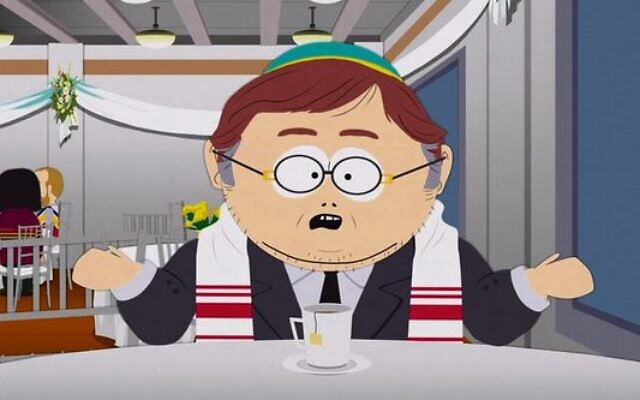 An adult Eric Cartman (Trey Parker) as a rabbi on South Park: Post COVID.Photo: Screenshot via Paramount+ via JTA

AFTER 20 years of making fun of his Jewish friend Kyle Broflovski, South Park’s Eric Cartman has converted to Judaism.

In a new hour-long special of the show, South Park: Post COVID, set 40 years in the future, the egomaniacal, hate speech-spouting sociopath we have come to know and love is now a rabbi in Colorado Springs.

He wears a tallit wherever he goes, has a Jewish wife named Yentl and three children, Moishe, Menorah and Hakham. His trademark blue hat now serves as a kippah. His sudden devotion to the Torah is enough of a shocker to send Kyle into fits of rage, as he becomes convinced his ex-friend’s new life is just a mean-spirited ruse.

Cartman has previously impersonated Hitler in an attempt to get The Passion of the Christ fans to re-enact the Holocaust, faked having Tourette Syndrome in order to spout antisemitic speech in public and tried to force Kyle to hand over his “Jew Gold”. He even jokingly converted to Judaism in a 2012 Passover special.

But this time he actually seems serious, even yelling out Talmudic lessons while in the bedroom with his wife.

Kyle, meanwhile, seems to have lapsed from his own beliefs in the intervening decades, noting at one point, “It’s been a long time since I’ve prayed.”

South Park co-creators Matt Stone (who is Jewish) and Trey Parker have built many episodes around Jewish themes, frequently making note of Cartman’s antisemitism – usually as a way to mock actual antisemites.