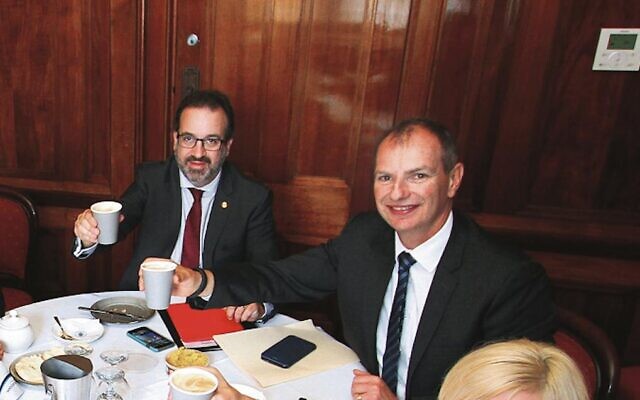 Martin Pakula and David Southwick at a Hadassah lunch in 2015.

AS Victoria begins planning for the upcoming election late next year, will the redraw of state electorates give Liberal Caulfield MP David Southwick a leg up at the ballot box or will the change crack open an opportunity for Labor to take Melbourne’s Jewish heartland?

The Victorian Electoral Commission (VEC) released the proposed boundary changes last week, including adjustments to Caulfield and its neighbours.

If the recommendations go ahead, the area south of Dandenong Road and Hotham Street in St Kilda East will be incorporated into Caulfield, but it would lose the corner of voters situated between Chapel Street, St Kilda Road and Inkerman Street – including St Kilda Town hall.

ABC analyst Antony Green, who originally viewed the adjustment as a win for Southwick, has since told The AJN, “The new boundaries reduce the Liberal margin in Caulfield from 0.3 per cent to 0.1 per cent, but that would only be a concern for David Southwick if the Liberal Party’s state result was as bad as in 2018.”

In 2018, Southwick scraped past with a 0.54 per cent margin over Labor’s Sorina Grasso, with only 200 votes between them.

The Liberals, however, have also plugged in the numbers based on the 2018 election, taking into account postal and pre-poll voting, with a spokesperson telling The AJN they are feeling confident that their margin is sitting at 1.1 per cent.

Southwick said: “I am pleased there has been minimal changes to the seat of Caulfield and I look forward to continuing to represent the people in the area that I love, live and grew up in.”

Meanwhile, the VEC proposals would see Martin Pakula’s electorate of Keysborough axed, with no available seat nearby. The looming loss would see the number of Jewish state MPs drop from three to two – and potentially to one, Paul Hamer, if fortune does not favour Southwick.

Pakula, who holds a range of ministerial positions, told The AJN, “The Jewish community has been well represented in the State Labor caucus in recent years by MPs such as Marsha Thompson, Philip Dalidakis, Paul Hamer and myself. Hopefully the community – and the party – sees some value in that.”

Hamer, who said he is “proud to be a Jewish voice inside the Victorian Parliament”, has been the MP for Box Hill since 2018. Green has estimated that the update to the east Melbourne electorate may have resulted in a 0.8 per cent increase for Hamer, moving Labor’s margin to 2.9 per cent.

The final electorate boundaries are set to be released in October.