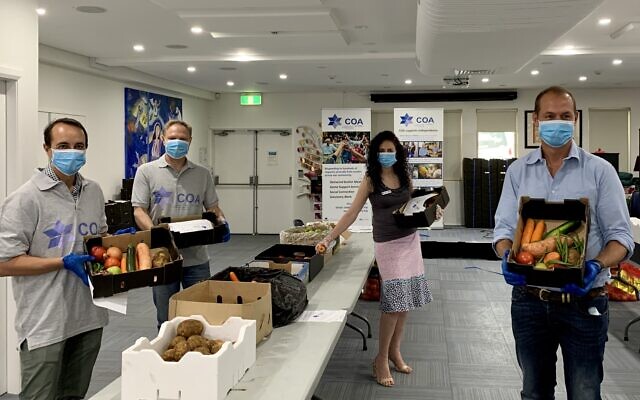 Thanks to the kindness of Harris Farm Markets, COA will deliver fresh fruit and vegetables daily to those most at need in the Sydney community. Pictured are (from left) Wentworth MP Dave Sharma, Waverley Councillor Leon Goltsman, COA CEO Rachel Tanny and Harris Farm Markets co-CEO Luke Harris.

IT all began with a kind handwritten note and a roll of much coveted toilet paper.

When Veronica Sherman had recently moved into a new home in the Melbourne suburb of Reservoir, she openly admired the flourishing tomato plants belonging to an elderly Italian neighbour a few doors down. And so, when the coronavirus pandemic escalated to another level in recent weeks, Veronica thought of her, and became concerned for her wellbeing. She took it upon herself to engage in a simple act of kindness.

“Please let me know if you need help with food, toilet paper or collecting medicine. I’m happy to help with anything needed. 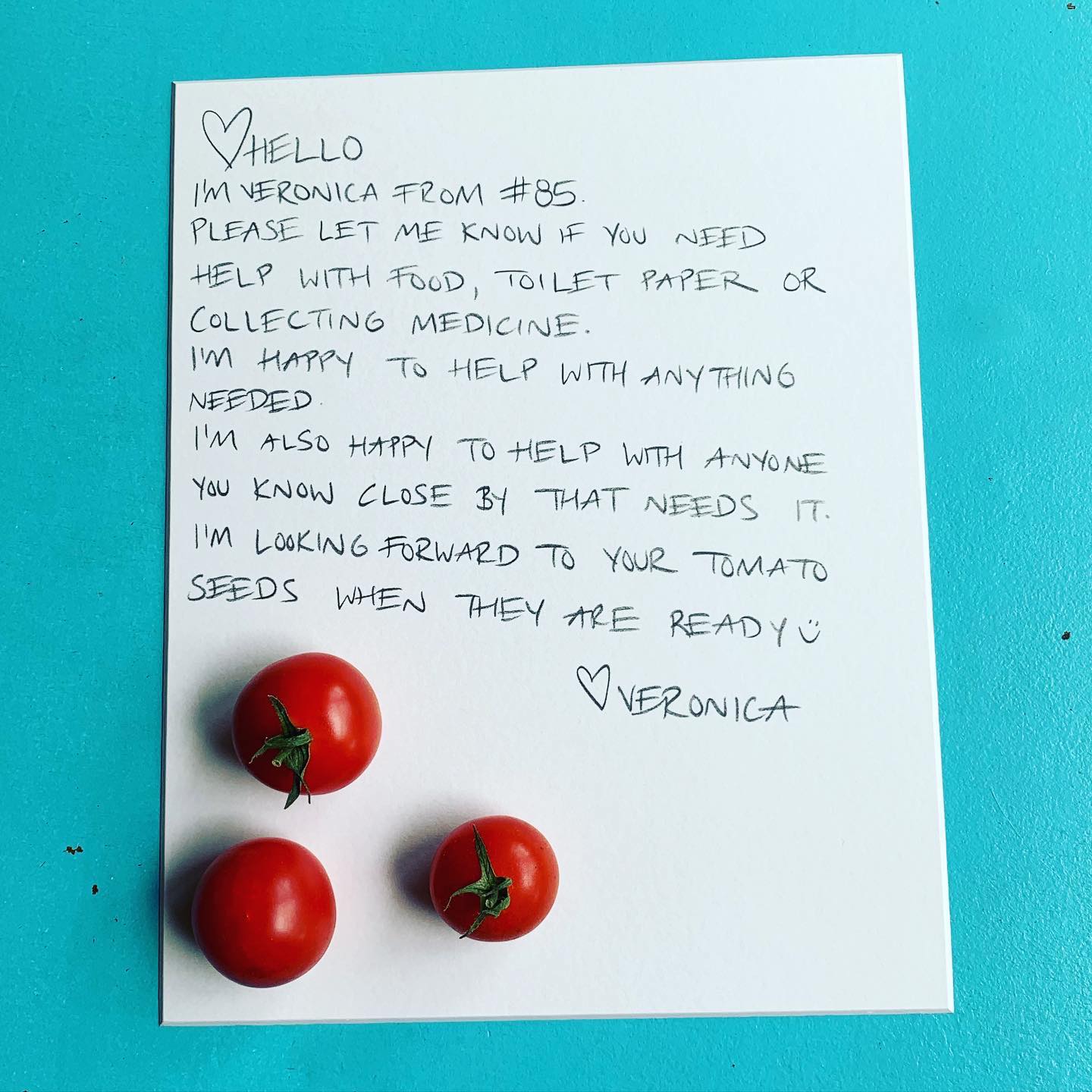 Veronica’s handwritten note to her neighbour.

“I’m also happy to help with anyone you know close by that needs it.”

And so the note – written in English on one side, and translated by a friend into Italian on the back – was dropped off with some toilet paper and tissues on the neighbour’s doorstep.

The response was simple and heartfelt. Veronica later received a basket of home-grown tomatoes and zucchinis. Touched by the gesture, she returned to her neighbour’s doorstep with more toilet paper and bleach. In gratitude, the woman left Veronica a tray of homemade Italian biscuits.

“It has been such a sweet exchange,” she muses, saying the acts have moved her whole family.

“I just really feel for those who are not connected online right now, which includes the elderly to a large extent.”

It is a concern that has propelled many into action in the Jewish community and beyond, with individuals and grassroots initiatives springing to life.

In Snowdon Avenue, Caulfield, a married couple wrote a letter which they dropped into the letterboxes of their neighbours, informing of a noticeboard they had erected outside their house. The note encouraged residents in need to pin their request on the noticeboard, should they need some challah, a distanced chat in the front garden, or anything else. The act began in acknowledgement of those older neighbours who may not engage with social media and thus feel isolated. Someone asked for rice; another person, for hand sanitiser, and the invisible walls of urban living began to dissipate as neighbours actually connected with each other. 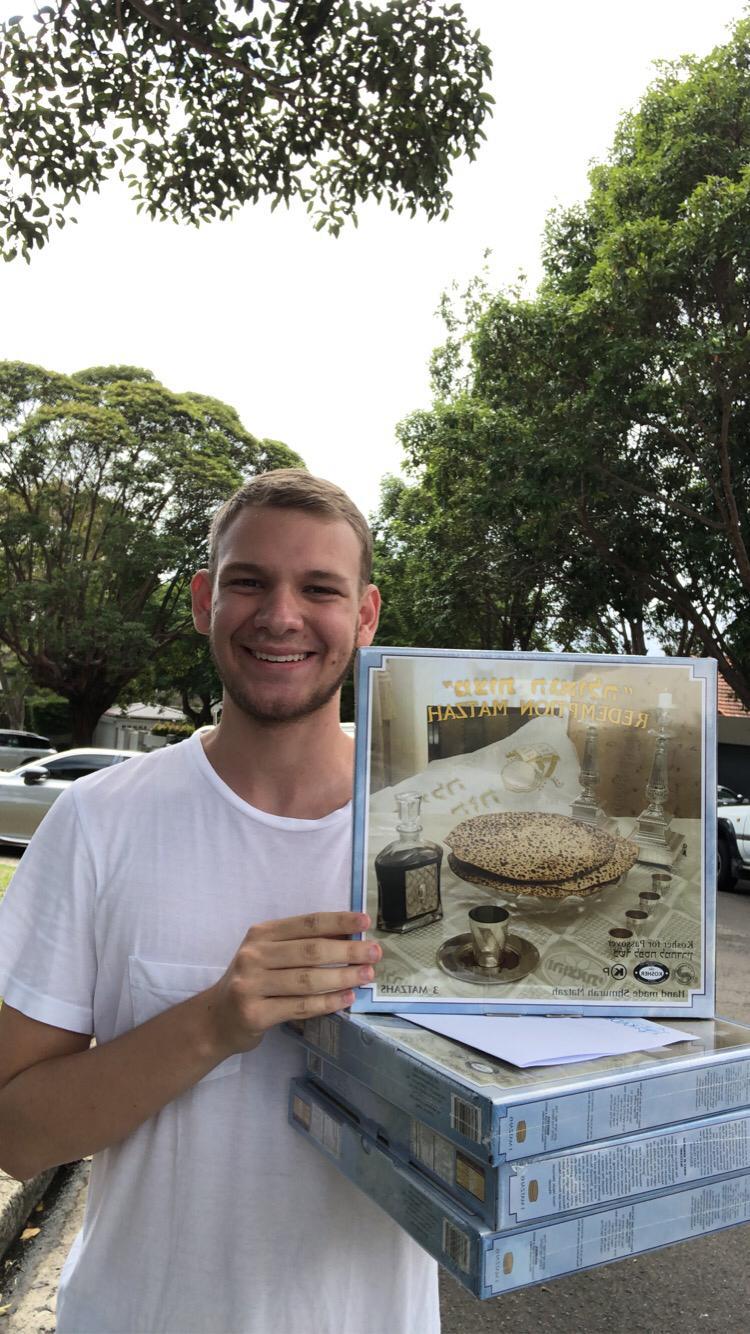 Meanwhile, personal trainers Keren Green and Martine Lewis have joined forces to organise a free online workshop for women. The class will teach exercises to promote fitness, strength and sanity while self-isolating.

But it has been the establishment of the Facebook page, “Jewish Response | Coronavirus (Victoria)” which has garnered an enormously positive response from the community.

While the page was founded by organisation Stand Up, it is community-driven. Established by newly appointed CEO Gideon Reisner, within four days more than 4000 community members joined, with more than half that number, in the first 24 hours.

The page functions as a space where people in need can reach out, where members can volunteer their services, and where resources can be shared.

“It’s been incredible,” reflects Gideon who says people have “come out of the woodwork” to assist in whatever way they can.

The initiative was born from a place of fear, he explains, a feeling shared by many at this time.

“I was going into the supermarket and felt a bit scared. I saw elderly people wondering where their bread is, and vulnerable people asking where their pasta is. I got really worried about it.”

Such has been the response to the initiative that since its creation, smaller teams of volunteers have been organised to address specific needs – among them, babysitting, IT, pharmaceuticals, shopping, transport, education, exercise and wellbeing needs.

The project works in collaboration with other organisations, with relationships being fostered with C Care, Our Village Kitchen, Pekelach and Chabad Malvern. Businesses on board have included Chemist Warehouse and various kosher butchers.

Indeed, the achievements of the initiative have been far-reaching and impactful. 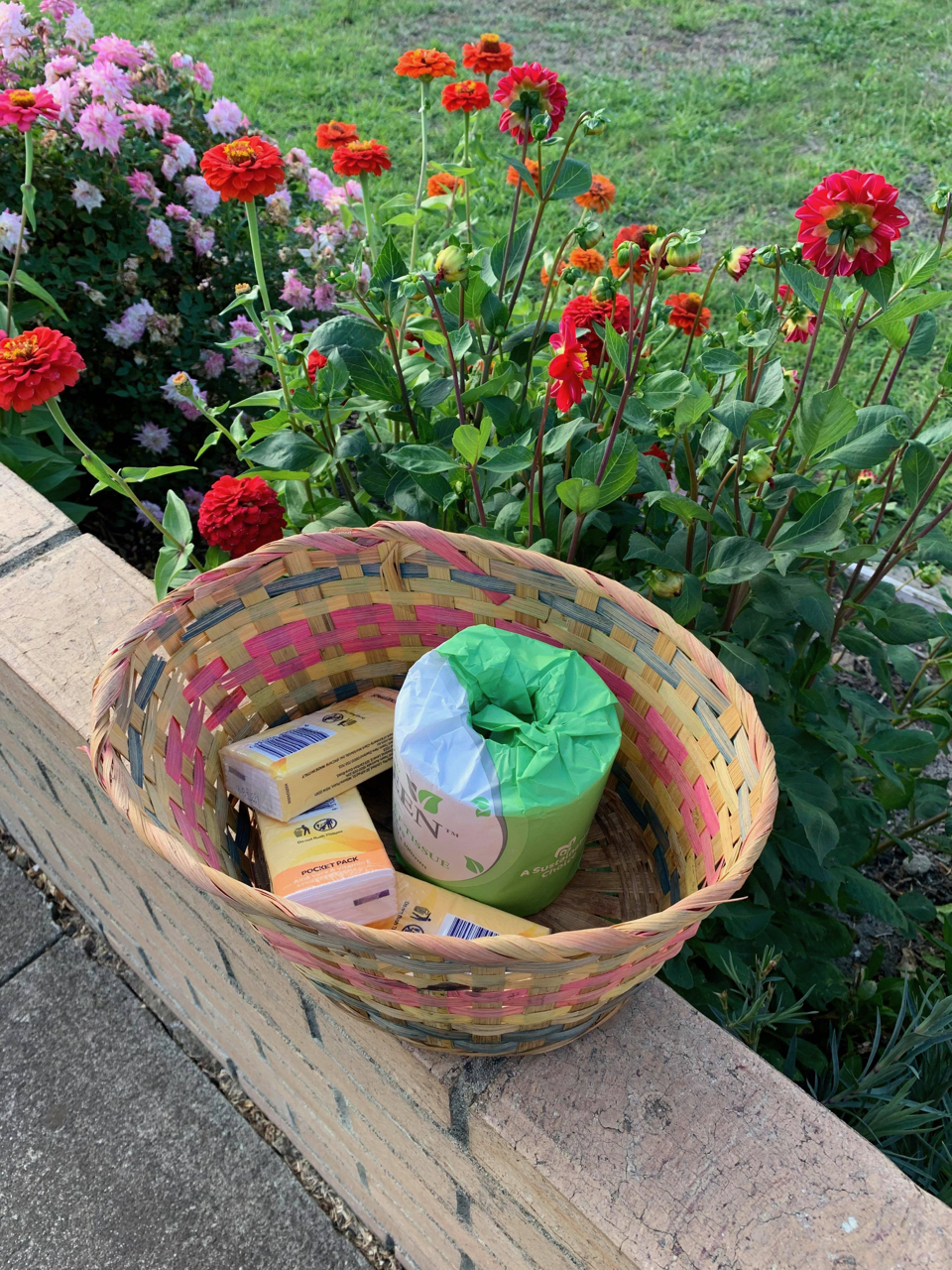 Veronica Sherman’s basket of toilet paper and tissues for her elderly neighbour.

Gideon recalls the first grocery drop to the doorstep of an elderly woman. “She couldn’t leave her home, so to receive this delivery, I know she was very happy. It has actually been the best moment so far, because it reaffirmed to me that this initiative is something that is needed. It’s actually working.

“But as the situation escalates, we’re urging people to either reach out for help, or reach out to help.”

While he thanks all those who have already generously volunteered, Gideon adds, “I am appealing to all members of the Jewish community to think about how, in this unprecedented moment, they can donate their time, resources or expertise so that we can weather this storm together.”

It is sentiment that has been taken up beyond Victoria, with Stand Up establishing a Sydney Facebook page, “although in its current shape, it serves more as a resource”, explains the page’s co-founder Joel McCarroll.

“But we’re happy for it to go in whatever direction the community needs it to grow.”

Sydney’s Marissa Wilk is also committed to providing support for isolated community members. The 23-year-old joined forces with Kehillat Kadimah’s Rabbi Dovy Rapoport to create the Community Help Initiative (CHI). Marissa works in events, but with her career coming to a halt in the midst of the pandemic, she was happy get involved.

The CHI aims to alleviate loneliness and provide a sense of community to those in need as an outlet for support and logistical help. Volunteers are either “companions” who are buddied with an at-risk person and then remain in regular communication with them; or “helpers”, assisting with errands throughout the community.

Marissa shares, “We’ve had some really beautiful responses. One person just started crying when we called him. He was just completely overwhelmed.”

Another person needed a helper to collect their medicine from the pharmacy. The helper delivered the medication – with a side of hummus.

“But one thing we are struggling with is getting the at-risk people to sign on to this because so many feel like they don’t want to be a burden, and think there are others that need the assistance more – but they need to know that they are our prime focus.” 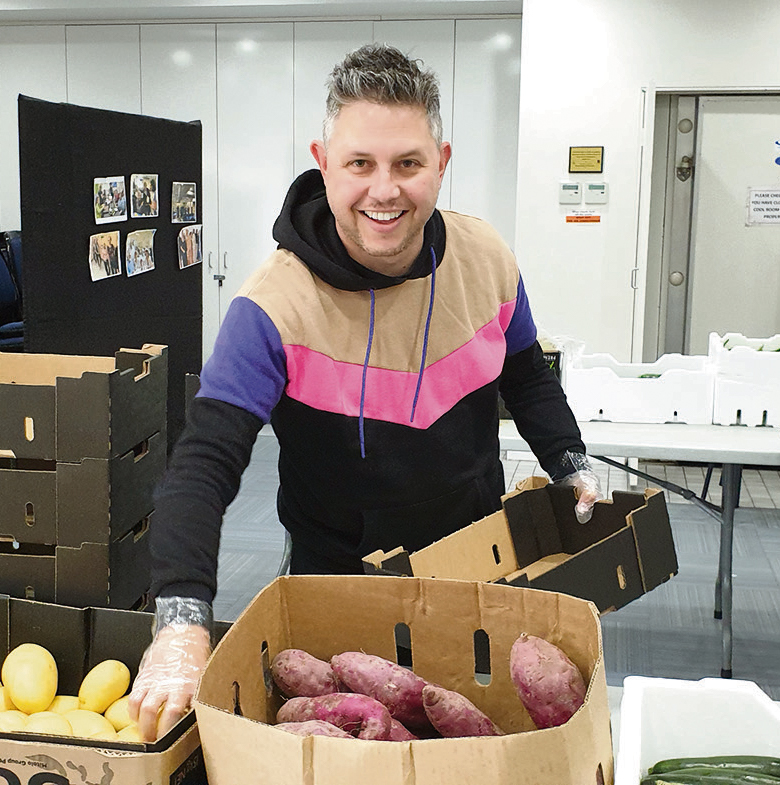 Currently, about 40 community members have been paired with volunteer companions, with more than 50 volunteers standing poised, ready to assist when needed. 90 people have joined as “helpers”. Most volunteers are aged between 19 and 25.

“It’s been pretty amazing to see how many people are so happy to help – especially younger people. We really wanted to empower the youth to be positively involved in this pandemic.”

For Rachel Tanny, CEO of COA, a not-for-profit volunteer-based organisation for Jewish seniors in Sydney, the demand for services increases every day. In response to the COVID-19 threat, COA offers kosher meals on wheels, set to continue throughout any future developments; a shopping project, where volunteers brave the supermarket on behalf of seniors; Shalom Connect, giving those who feel alone the opportunity to chat regularly with volunteers; and Tech Connect, where tablets are supplied to those who don’t have them in order to facilitate video calls with loved ones.

Additionally, in a new project in partnership with Harris Farm Markets, 100 large baskets of fresh fruit and vegetables will be delivered to those in need, daily and free of charge. COA have also teamed with Chabad Double Bay’s Helper 101 program and B’nai B’rith NSW to create an army of volunteers to make the deliveries.

Thank you once again Harris Farm, Rachel Tanny, Sabina Kay and the entire COA Team for working around the clock and ensuring that over 500 people are fed each week.

“It’s such a thrill to be able to work on such a project like this, where you are actually seeing people’s lives not just improved, but to tangibly see them taken out of the line of danger,” enthuses Rachel.

And it is resonating, she tells, recounting a message she received from an elderly vision-impaired woman. Her late husband was a war veteran, and she now lives alone.

“I am extremely grateful and touched,” she wrote in a short but sweet note to COA.

With cooperation between over 200 volunteers – with more coming aboard daily – the assistance of local Waverley Councillor Leon Goltsman and fellow Jewish organisations, Rachel is amazed to see how people have come together in a crisis.

“It is just so moving to watch it happen and unfold before our eyes,” she says.

“It really is unbelievable to see that in such a period of darkness we have people who are willing to come out and bring light into the world.”

For more information on: