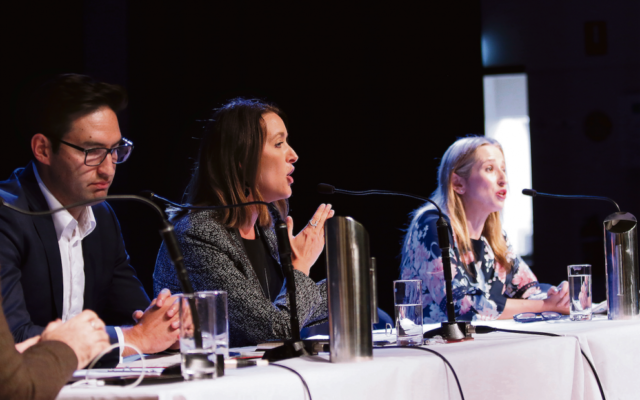 TAKE a trio of edgy candidates, a raft of combustible issues, and an auditorium of impassioned partisan supporters, and you have last Sunday night’s Great Debate for Macnamara at Glen Eira Town Hall, sponsored by the Australasian Union of Jewish Students (AUJS) and the Australian Zionist Youth Council, in partnership with The Australian Jewish News.

With regards to security, Burns recalled ex-Labor PM Kevin Rudd’s Secure Schools program, with its “first and biggest” funding of security at Jewish schools, and Labor Premier Daniel Andrews’ “outstanding job of partnering with the CSG and the JCCV”. 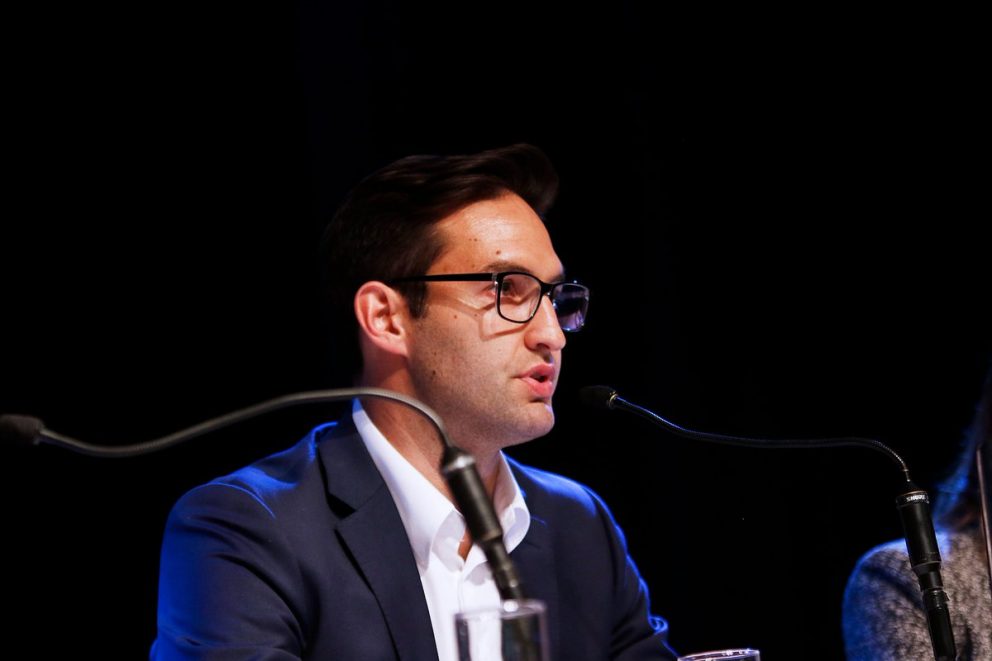 Describing the Christchurch massacre as “heartbreaking”, Ashmor said, “Everyone in this room, particularly Jewish people, will know what it is like when our community is impacted by terrible, terrible crimes like that. I’m very proud that the government has recently announced an additional $55 million for the Safer Communities program.”

Hodgins-May said Greens policy is to work with police on preventing security threats and to invest in “mental health services and programs” to “channel individuals towards different pathways”.

But a verbal brawl erupted over who to preference last on how-to-vote cards. Burns noted Ashmor had ignored his challenge to emulate Labor and preference One Nation last. 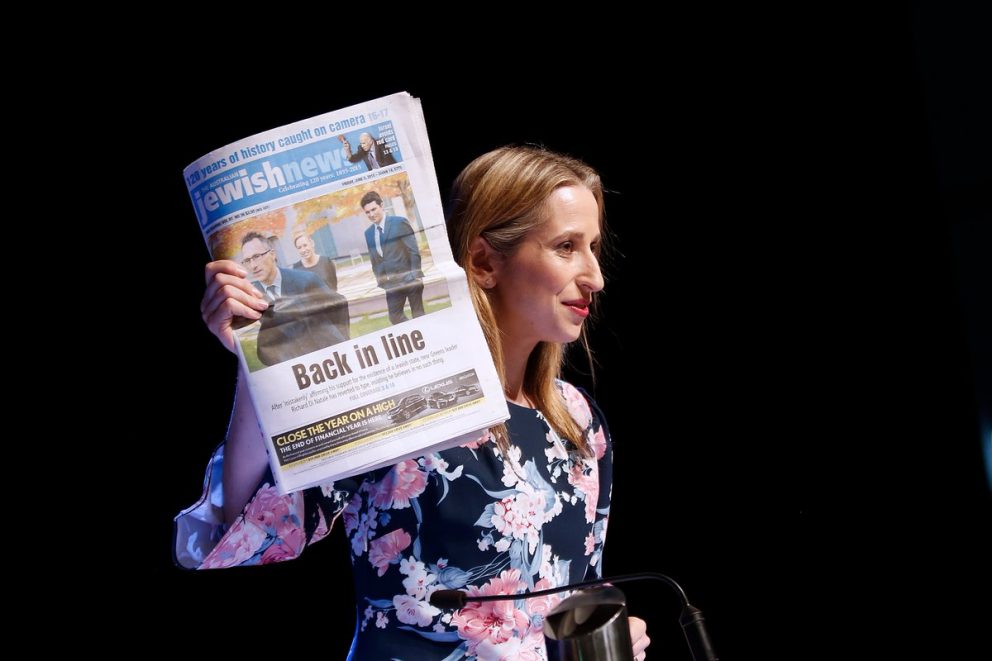 Describing Greens leader Richard Di Natale’s refusal to recognise Israel as a “Jewish state” as “racist and antisemitic”, Ashmor said the Liberals will preference “all bigots and all antisemites” last. Burns said the Greens’ ranking on his how-to-vote cards was still being finalised, to which Ashmor shouted back, “Oh come on, they’re antisemitic … You’re Jewish and they’re antisemitic!” It prompted Hodgins-May to retort, “Kate, what a load of rubbish!”

As the shouting match continued, Hodgins-May told Ashmor, “There are antisemites … right across every political party … and there are racists, there are Islamophobes. Some of your colleagues in the Senate shook the hand of Fraser Anning,” after his notorious “final solution” speech against Muslim immigration last year. 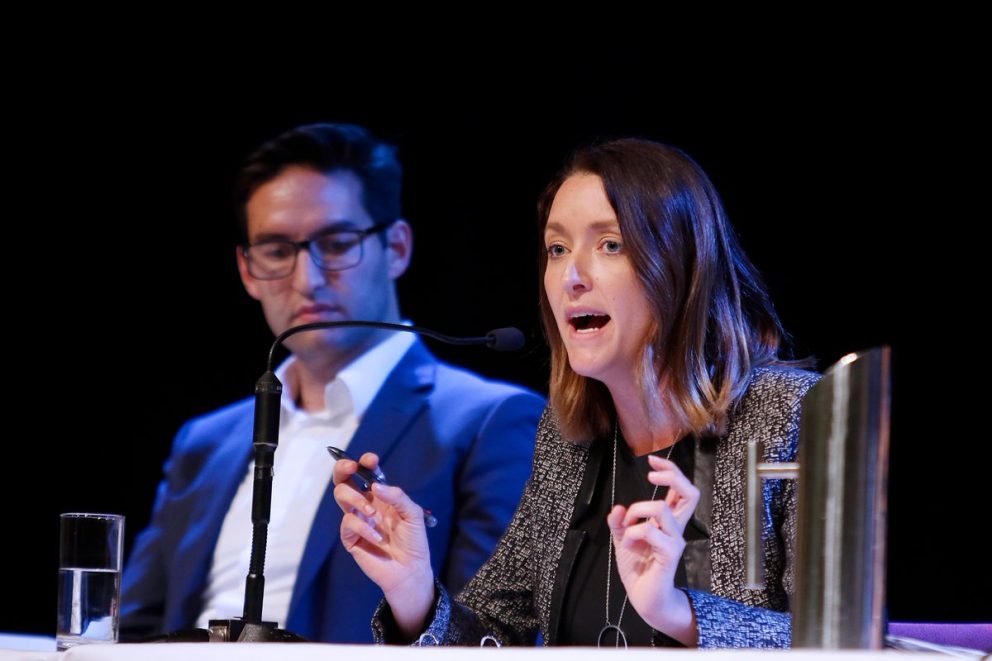 Hodgins-May “unreservedly” apologised for a staffer’s Facebook post stating that Israel’s Gaza actions were “genocide”, but when candidates were quizzed on what Zionism means to them, the Greens candidate, who is not Jewish – and had withdrawn from the 2016 election debate citing Zionism Victoria’s involvement – said Jews within her party had told her of “four different answers” to what Zionism meant. Burns said, “Zionism means to me the same thing it meant to my zaida born in 1948, the self-determination of the Jewish people.”

Over Kirsh’s objections, Ashmor then pivoted the “Zionism” question to “Mount Scopus … they’re a Zionist school”. She lamented the high cost of bussing students to Burwood, but said since the school’s announcement of Labor’s $5 million feasibility study into relocating to Caulfield, she has had “a lot of upset people ring me” after the school posted on Facebook a letter announcing Labor’s pledge.

But she has since been assured by the Mount Scopus board that “when the government and I, before the election, are in a position to respond”, the school will announce any Liberal initiative “to exactly the same broad audience”.

On last December’s ALP conference urging a Labor government to unilaterally recognise a Palestinian state, Ashmor said Hamas, which runs Gaza, “is a proscribed terrorist organisation under Australian law. If someone from Hamas walked in … they would murder every Jew here, because it’s not about Israelis, it’s about Jews … Is a Bill Shorten-led Labor government going to have diplomatic relations with Hamas?”

Burns said “Gaza is not in a position to be recognised … I will be a voice inside the Labor Party ensuring we tackle this issue very, very carefully,” while stressing the recognition resolution was “non-binding”.

Then he slammed the government over “playing with foreign policy on domestic politics, as we saw in Wentworth … the Prime Minister decided to dangle the move of the Israeli embassy to Jerusalem, one that he has obviously since pulled back from … I don’t want to see the Jewish community being used as a political football”.

Hodgins-May said she and the Greens “support a Palestinian state and an Israeli state”.