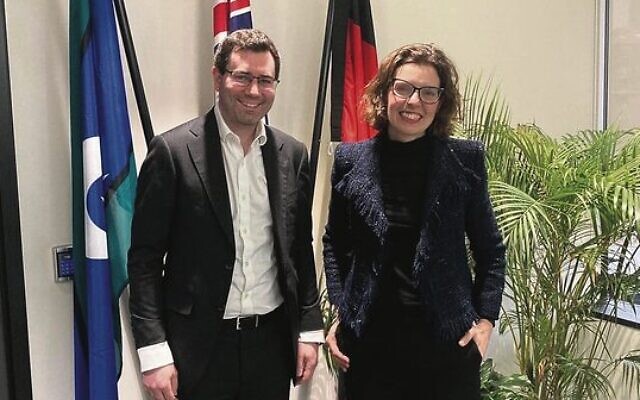 NSW Jewish Board of Deputies (JBD) CEO Darren Bark met with newly elected Wentworth MP Allegra Spender for the first time last week to discuss Australia’s ties to Israel and the Jewish community, as well as the rise of antisemitism.

Spender also met with Israel’s ambassador to Australia Amir Maimon last week and told The AJN she is “looking forward to visiting Israel in the next 12 months”.

“Last week I was thrilled to meet with His Excellency Mr Amir Maimon, Israel’s ambassador to Australia, as well as Darren Bark, chief executive of the NSW Jewish Board of Deputies,” Spender said.

“It was great to discuss with Darren how to continue to build deep connections with the Jewish community, as well as the interfaith community here in Wentworth. With the ambassador, we discussed Israel and Australia’s strong relationship and how we can deepen this further, particularly in areas such as clean technology.” 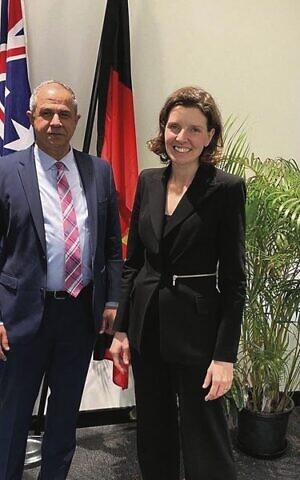 Bark said the NSW JBD is looking forward to working with Spender.

“It was great to meet with Allegra Spender MP for the first time since she was elected as the Member for Wentworth,” he said.

“We had a warm and productive meeting which addressed the ongoing scourge of antisemitism, bolstering communal security, and the strong ties between Israel and Australia.

“We look forward to working with Allegra and her team and to hosting her at one of our events later this year.”

Maimon added, “a pleasure to discuss the warm Israel–Australia relationship and the vibrant Jewish community in Wentworth with Allegra Spender MP.”

“The NSW JBD wholeheartedly endorses and adopts the Executive Council of Australian Jewry (ECAJ) policy on climate change which states: The ECAJ declares its support for laws and policies with appropriate milestones designed to achieve net zero emissions by 2050, or earlier where necessary.”

“Climate change is a central discussion in boardrooms, the Parliament and at kitchen tables across Australia,” O’Callaghan said.

“It is an existential risk to many species, to communities in low lying coastal areas and to the world’s food supply.”

He called for increased conversations about climate change so community members can learn more about “the risks of inaction but also what individuals and organisations can do to contribute to make their actions as eco-friendly as possible”.