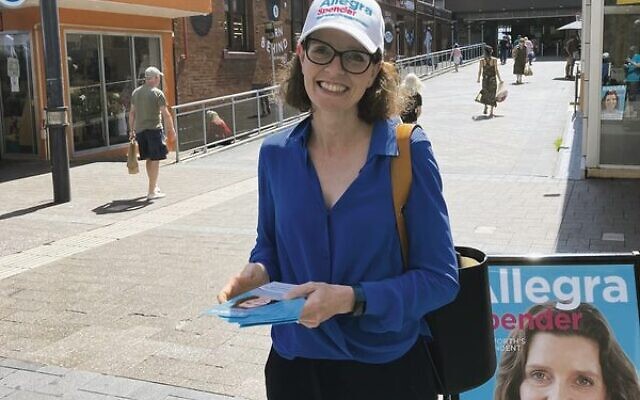 INDEPENDENT Wentworth candidate Allegra Spender has reiterated her strong support for Israel following a story in this week’s The Australian regarding a supporter of her campaign.

The article concerned a series of anti-Israel statements made by climate activist Blair Palese, who is a member of the Wentworth Independents movement that was formed to select a candidate to challenge incumbent Liberal MP Dave Sharma.

The Australian claimed Palese – who has alluded to Australia’s “shocking support of Israel” and supported January’s Sydney Festival boycott – is a “key figure” behind the Spender campaign. Palese has been campaigning for Spender on social media.

A spokesperson for Spender told The AJN in January that Palese “does not and has never” worked on her campaign after the latter re-tweeted a post from Sydney Festival boycott organiser Fahad Ali praising artists who had withdrawn.

Spender reiterated that position this week. “Blair is not a member of my campaign team. She is a supporter,” Spender told The AJN.

Liberal National Senator James McGrath cited The AJN‘s report about Palese’s retweet and the Spender campaign response (28/01) in a speech to Parliament last Tuesday, where he also noted that principal campaign supporters Lyndell and Daniel Droga are GetUp donors.

GetUp board member Sara Saleh was a co-organiser of the Sydney Festival boycott and last year featured in a video that contained a litany of anti-Israel mistruths, which GetUp stood behind.

Spender told The AJN, “I determine all my policy positions … that’s one of the advantages of being an independent. None of my supporters or anyone involved in my campaign team actually makes the decision about what I stand for.”

She also reiterated her strong opposition to the BDS movement and the Sydney Festival boycott, after making similar comments in January.

“I strongly support Israel’s right to defend itself and the strong relationship between Israel and Australia, which I would seek to strengthen if I was elected the Independent member for Wentworth,” she added.

“It is very disappointing that Allegra Spender appears to be subject to this same tactic,” Stricker-Phelps said.

“I have known Allegra and her family since she was 12. She is an intelligent, committed, hard-working and inclusive person.”