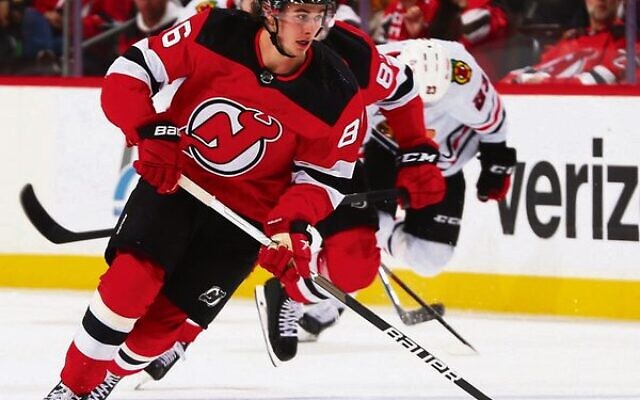 Medvedev – the oldest athlete in the men’s apparatus finals – posted scores of 14.533 and 14.766 to come third in the vault, just behind Japan’s Hidenobu Yonekura, and winner Carlos Yulo from the Philippines.

“I’m 31 … it took me a long time to get this medal, and it makes this achievement even sweeter,” Medvedev said.

THE new NHL season stars a historically high number of Jewish players to follow with pride.

Former Toronto Maple Leafs player Zach Hyman is a top winger who has just been snapped up by the Edmonton Oilers on a seven-year contract worth $38.5 million.

The Hughes brothers are also ones to watch. Quinn, 21, is a promising defender for the Vancouver Canucks, where his younger brother Luke was drafted last year, while middle brother Jack (pictured) is a proven goalscorer for the New Jersey Devils.

JEWISH big hitter for the Atlanta Braves, Joc Pederson, is playing so well in the MLB playoffs, his fans have renamed this month Joctober.

The 29-year-old, who won last year’s World Series with the Los Angeles Dodgers, scored a couple of home runs against his old team last week to help the Braves seal a 4-2 League Championship Series win.

He also captured attention lately by wearing a pearl necklace while playing, just for the heck of it.

The Astros, who include Jewish batter Alex Bregman, qualified by defeating the Boston Red Sox by four games to two.